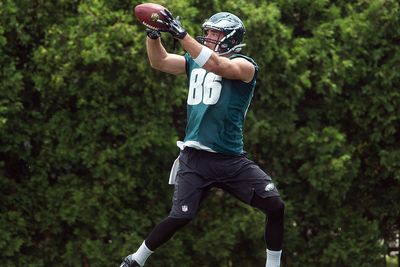 Zach Ertz is likely going to be a game-time call for Week 1. We break down the fantasy implications.

Philadelphia Eagles tight end Zach Ertz is expected to be a game-time decision for Monday’s game against the Atlanta Falcons, according to Martin Frank of the Delaware News Journal. He has been cleared to practice and is getting closer to his debut.

Ertz suffered a core muscle injury back on Aug. 14 and needed a procedure to repair the injury. The Eagles have been optimistic he would be able to suit up and some reports say he’ll be ready to play.

The Eagles have also hinted he’ll be getting a big bump in snaps after not being featured in 2014. He played more of a second fiddle to tight end Brent Celek and now will likely be the main option. Plus, he won’t be blocking as much and should do damage as an H-back kind of player since the up-tempo Eagles should be producing tons of offense.

Fantasy impact: If Ertz is your only tight end, you might be in a bad spot for now. He’s still a must-own player with top-five upside, but you might not want to play him on Monday night.

Contributor - February 19, 2017
0
Former UFC Lightweight Champion Eddie Alvarez plans comeback fight against very soon!!! Read more on the return of Eddie Alvarez... Since he was obliterated at the...