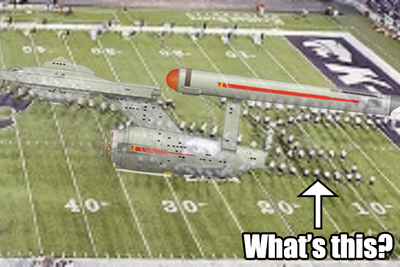 Kansas State’s marching band claims they were paying homage to Star Trek with the incredibly phallic-looking object that entered a Jayhawk’s mouth during their halftime show. Let’s assume for a second they really were trying to create the Starship Enterprise. There are a lot of problems.

Kirk H. Schulz is Kansas State’s President, so we’ll assume that we’re talking about the Constitution-class USS Enterprise (NCC-1701) that Kirk was the captain of.

1. Kirk would NEVER ram the saucer section of the Enterprise into an Intergalactic Jayhawk.

This is just common sense. You’re captain of USS’ flagship, which means you basically have four jobs: To explore new worlds, seek out new life, boldly go where no one has gone before and DON’T KILL YOUR CREW.

The bridge of the NCC-1701 was on top of the saucer section. We’re supposed to believe Kirk would risk his entire ship and crew by ramming a Jayhawk over using photon torpedoes and phasers? I sure don’t.

2. The Enterprise would NEVER instigate aggression towards an Intergalactic Jayhawk.

Starfleet’s modus operandi is to never engage unless defending oneself. There is no wiggle room. Heck, Picard didn’t even fire the first shot against the Borg until it was absolutely necessary.

We can’t fully tell from the halftime performance, but it seems like the Enterprise doesn’t attempt to hail the Jayhawk or open lines of communication — they simply move to ramming speed.

3. An Intergalactic Jayhawk would NEVER open its mouth with an attacker closing.

Forget Star Trek for a second. This one’s just common sense. As a Jayhawk you have two weapons at your disposal: A hard, sharp beak and your talons. If a spaceship is flying at you at ramming speed, what are you going to go? Brace for impact with that hard beak, or open your mouth and ensure your destruction?

Not buying it, K-State.

4. What is this supposed to be?

I’ve superimposed an image of the Enterprise on top of Kansas State’s attempt to show precisely what’s wrong with this ship design. Not only did they get the proportions all wrong, but they added an entire section of the ship that doesn’t exist.

I’d love to hear an explanation behind putting a part of the ship directly underneath the warp engine.

I have a hard time believing a school that has enough skill to create a giant moving Jayhawk couldn’t create an accurate representation of the Enterprise if they tried. That’s a compliment, K-State.

Could it be the Enterprise?

Sure, it could be. I won’t deny that it kind of looks like the Enterprise, but there’s more to this ship than just a hull — there’s a spirit. This is what was sorely lacking in Kansas State’s attempt. The school missed what Star Trek is all about.

LatinoAthlete Staff - August 3, 2015
0
How can this possibly be accurate? Under Armour's new uniforms for Notre Dame, Auburn, Maryland, Utah and Cincinnati were released on Monday, and...