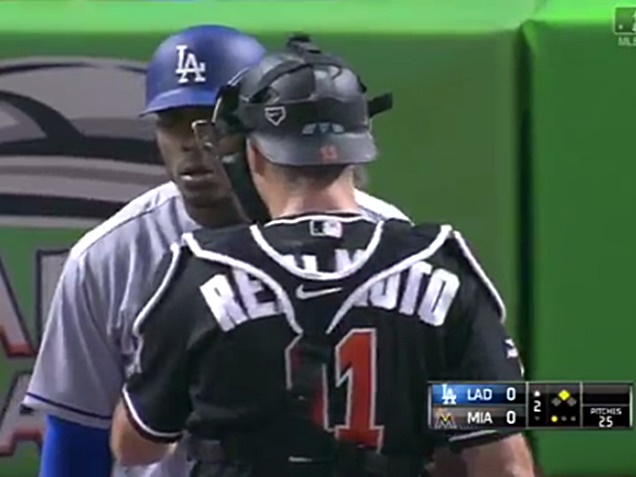 The big question that remains after the Miami Marlins’ Jose Urena pitched a 96 mph fast ball at Yasiel Puig thigh.

Yasiel Puig jumped back, but immediately started stepping to the pitchers plate to confront Jose Urena. Read on and watch…

After nearly being hit by Jose Urena’s pitch, Dave Roberts said outfielder Yasiel Puig was wrong to take several steps toward the mound. The Dodgers manager was not happy with the way Yasiel conducted himself on the field. He went on saying that Puig’s reaction was uncalled for.

It looks to us, that Marlins pitcher Jose Urena may have thrown the ball a little to the right, but who is to say. Yasiel’s family jewels were at stake and he was a bit pissed about it.

Do you blame Yasiel Puig?

The reason why Puig’s Cuban temper kicked in, is that it was the first pitch to Puig in the second inning, so he took it personal. In the video you can see Puig shouting at Urena and taking several steps while some players and both managers ran onto the field.

They say MLB is boring. Maybe they need to amp it up with a few hot tempers and so baseball bats flying. This is entertainment to us. We agree with Puig. Getting hit by a fastball is no joke, so yes he can be mad about it, and then move on.

Here is what Dodgers manager Dave Roberts had to say:

Of course, Roberts weighed in saying:

“Yasiel overreacted. It’s clear to me there was no intent [by Urena].”

Urena agreed with Roberts, by adding this:

“He got like a little baby. When he was walking [toward] me, that was disrespect. I play the game. I respect the game. If you do something like that, let’s go.”

This is not the first time Puig has annoyed opponents. Let’s not forget Puig’s infamous double middle fingers toward several fans in Cleveland after he homered. he got suspended for on game for that stun.

Bottom line, Puig has a temper, so expect him to pop off from time to time, but this is why we go to Dodgers games. Just for Puig. We love him!

Puig hit two home runs in the Dodgers’ win Friday, including the go-ahead three-run homer in the ninth inning. On Saturday, the Dodgers won 7-1, Puig finished 0-for-2

Contributor - June 23, 2017
0
Francisco Rodriguez has been retired by the Detroit Tigers after a tough season on the mound. The Venezuelan MLB player didn't take the news well. Get...