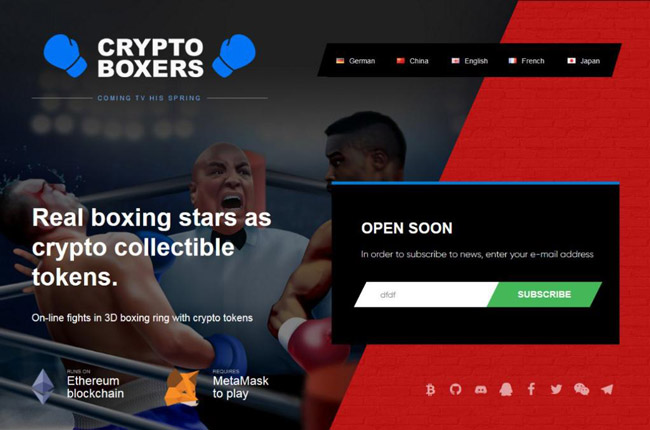 Slated to launch this summer, Crypto Boxers is the first and only boxing game operating on blockchain technology, with crypto tokens issued by boxing celebrities. Hall of Famer and legendary referee Joe “Mr. Fair But Firm” Cortez is the first celebrity announcement with his own avatar calling all the fights on the game! Crypto Boxers will feature real life boxing professionals as collectible tokens for the virtual fighting action on Ethereum, an open-source, public, blockchain-based distributed computing platform and operating system featuring smart contract functionality.

“My team and I are ecstatic about this launch. We originally planned this as a fighting game app, but I’m always looking for and reaching to the next frontier. Cryptocurrency is the next frontier and merging our game into that space seemed like a perfect marriage. So, we delayed our original launch and went back to the drawing board. I’m now offering gamers a unique opportunity to not only fight in a virtual boxing ring but to also explore this new realm of digital currency. What Madden did for the game industry is what Crypto Boxers is going to do for cryptocurrency.”

“Crypto Boxers is the next logical step up over PlayStation. The game allows the player the opportunity to not only compete, but to also earn money upon winning. The game’s virtual boxers will not only battle in virtual reality matches, but they will also earn digital rewards for their wins!”

“This game will be the closest thing to getting in an actual ring with your gloves on!” cites referee Joe Cortez. “You think you got what it takes to be a professional boxer? You think you can beat enough opponents to earn your way to a title? Then bring it to Crypto Boxers!”

Yahu Blackwell, named the World Boxing Union (WBU) novice world champion, has compiled a record of 15-0 in the International Boxing League (IBL). Known as “The People’s Champion” the Nigerian boxer was raised and still resides in Baltimore, MD. An entrepreneur and philanthropist, the handsome young boxer continuously seeks to expand his brand outside of the ring. The champ has become the face of My Sister Cares Foundation, a non-profit that is dedicated to providing food, shelter and clothing to orphans, in Cameroon, Africa. He donated to the organization to help build a new orphanage. He also recently became a franchise owner with the purchase of his first store, Rita’s Italian Ice restaurant. Blackwell will make an upcoming appearance on a popular Bravo TV reality show and has plans for the big movie screen as well. He has trained with the likes of Freddy Roach and Floyd Mayweather Sr. and will be entering the real ring again later in March, with additional matches planned for the year.

Crypto Boxers is going to knock out the fight game!

LatinoAthlete Staff - December 3, 2015
0
Oscar Pistorius’ earlier manslaughter verdict has been overturned by a South African appeals court who called the case "a human tragedy of...