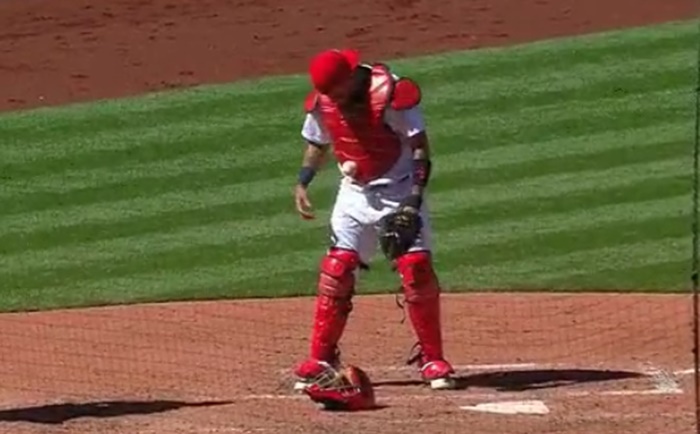 Yadier Molina has become the highest paid catcher in the MLB, so you might say he’s stuck to baseball. Literally. Yesterday one of the balls showed Yadier how appreciative it was that Yadi stayed a Cardinal.

Yadier Molina stuck to a baseball? what the? Yadi had the strangest thing happen to him…

LatinoAthlete.com caught wind of what happened when the Cardinals catcher Yadier Molina got stuck looking for the baseball. The funny thing about this is that the ball was stuck to his chest protector after a wild pitch by Brett Cecil in the seventh inning.

The ball was basically showing Yadier Molina some love for staying a St. Louis Cardinal, because the incident was unexplainable.

If this was an animated cartoon we’d get a close up of the baseball saying “I love you Yadier Molina.” It wasn’t so we’re improving a reason on why it happened.

After the ball got stuck to Yadier, Kyle Schwarber hit a three-run homer two batters later to propel the Cubs to a 6-4 victory Thursday. It was the Cardinals last day of three with the Cubs and apparently the ball didn’t want to say goodbye to Molina.

The ball was litterally stuck to Yadier. Molina was baffeled looking around for the ball, but he had it the whole time, on his catcher suit.

Who knew this could happen, but it did!

are you kidding me pic.twitter.com/Xsvl1NtngH

After the craziest incident in baseball history happened, Molina was asked if he put something on his catcher suit. We guess the Cardinals thought that would have made the ball stick to his chest protector.

“Do I put anything on my chest protector? No. That’s a dumb question.”

There you have it, unexplained!

Ex-UCLA coach basically admits Diddy’s son is on scholarship because of...