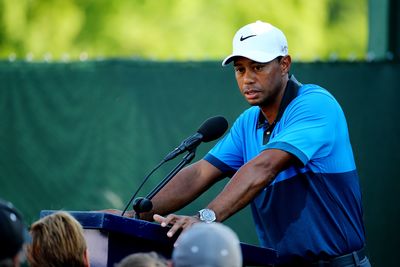 The biggest draw in the history of golf, Tiger Woods, makes his first ever appearance at one of the PGA Tour’s oldest events in Greensboro. Here’s how to watch his opening round.

There is just one more regular season event on the PGA Tour schedule. The Wyndham Championship tees off at the crack of dawn Thursday morning in Greensboro with a field comprised of a few world stars, several players fighting to get into the FedExCup, and many fringe talents trying to improve their status on the highest level tour in the world. Oh, and there’s also the biggest draw in the history of the game, Tiger Woods.

After almost 20 years on the PGA Tour, Tiger is finally dropping down in Greensboro to play one of its oldest events. The Wyndham, nee Greater Greensboro Open, used to be one of the elite tournaments on the Tour. It has been around since the late 1930s. But in the modern era, it has been bumped to a tough spot on the schedule and sandwiched in at the end of the season between the final major and the start of the playoffs. Suffice to say it does not hold the same appeal or status when past legends used to always make the trip to Greensboro.

So Tiger has never had the time or interest or need to play this event. But last Friday that changed, when the Tour made the surprising announcement that he had entered the field. Woods is 286th in the world and a shell of the player who would not have even contemplated this event’s existence. But he needs reps and wants reps with a swing he maintains is coming into form with consultant Chris Como. There’s also that longshot possibility that he wins the damn thing and his season doesn’t end right here, but with a last-minute qualification into the FedExCup Playoffs.

Tiger’s entrance into the field obviously changes the entire dynamic of a tournament, even if he’s playing like garbage and been competitively irrelevant all summer. It’s a particular boon to an event he’s never played before, especially with this history and local following. So all of Greensboro may turn up to follow Woods Thursday morning at Sedgefield Country Club, where he tees off with Brooks Koepka and Hideki Matsuyama at 7:50 a.m. ET.

If you’re not in that crowd and wanting to watch him on TV, well, you’re out of luck. His round will finish hours before the TV broadcast window on Golf Channel. However, the Tour’s new over-the-top subscription streaming service, PGA TOUR Live, will have a marquee groups stream up and running early — and of course, Tiger’s group is featured. In the past, this service would be free but now it’s a behind a paywall as part of this nascent streaming experiment the Tour is undertaking with MLB Advanced Media. If you’re not a subscriber and annoyed that you now have to pay to watch these marquee groups streams, there is a free trial you could sign up for right now and can see Thursday morning’s golf that way.

Here are all your media options for the week in Akron:

LatinoAthlete Staff - July 23, 2015
0
This is maybe the best goal call of all time. Mexico were gifted an equalizing goal late in regulation in their CONCACAF Gold...