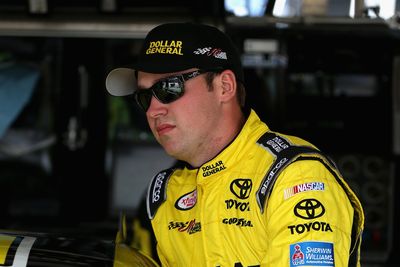 Appropriately, Matt Kenseth will see 22-year-old son Ross make his NASCAR national division debut on Father’s Day weekend. As Ross will be driving a Joe Gibbs Racing No. 20 car with sponsorship from Dollar General — the same as Matt does in the Sprint Cup Series — in Saturday night’s Xfinity Series race at Chicagoland Speedway.

“It’s going to be neat to see him in that car,” Matt said. “It will be weird to see somebody in there because I feel it’s my car, but I know Ross can do a good job and can’t wait to be part of that.”

Because their respective schedules don’t often align, with dad racing in one part of the country while son is elsewhere, Matt hasn’t seen Ross race firsthand except on rare occasions. One of those times occurred last weekend, as the Sprint Cup and ARCA Series, the latter that Ross was competing in, were both running at Michigan International Speedway.

Though Matt made it a point not to say much over the radio during the race, watching in-person did allow the 2003 Cup Series champion to offer Ross plenty of advice beforehand. And listening to dad’s tips paid dividends, with Ross winning his first race on a big track.

“There was a lot of things that he told me about the way those cars are aero-wise, how hard it is back in traffic to get around guys, position yourself not to get yourself into a tight spot, which I think helped me out quite a bit,” Ross said. “Even after the race when we watched the race together, there were a few things I felt like I could have done better, we were able to point out, kind of talk about a little bit.”

Said Matt: “There was a lot of things I was thinking of to go help him with. I was listening to him, what the car was doing, how it was. Only having a few laps on a track that big and that fast, I was pretty impressed by that. I realized he wasn’t going to need a lot of guidance from me last weekend.”

That Matt was fairly quiet during the race and didn’t bombard his son with information goes back to when Ross was a teenager racing Late Models in the Midwest. Matt remembers observing a test session where he thought the car was doing one thing, while Ross told the crew it was doing the opposite.

“I remember one of the first times we were at a track together, I was watching Ross drive,” Matt said. “I was like, ‘Man, that thing drives like this, it’s doing this, doing that. He should do this, he should do that.’ So he came back in and I went and drove it. I came back in and said, ‘Never mind. Everything he’s telling you is exactly right. Just forget it.’ I put my street clothes back on and didn’t drive anymore.”

With the Cup Series off this weekend, Matt will be in attendance at Chicagoland. The plan is to watch the race from the top of No. 20 team’s pit box, a position he admits he hasn’t been in “very many times.”

Saturday is Ross’s only scheduled Xfinity start of the season. As for his goals, he’s keeping them reasonable — hoping to avoid trouble, complete all the laps and put himself in a good position to score a solid finish.

“Just be up to speed and be real competitive I think is what I was looking for going in,” Ross said. “Hopefully, if I can do my part and give good feedback to the guys, get the car better, we can be competitive and come out of there with a solid finish, whatever that may be.”

What’s next for Ross beyond this weekend is still undecided. Ideally, he would secure a ride in either the Xfinity or Camping World Truck Series that affords him the opportunity to run fulltime. But like just about everything in NASCAR, that’s predicated on sponsorship. And right now, the Kenseths are still seeking the necessary funding.

LatinoAthlete Staff - August 23, 2013
0
Crowd Goes Wild talks soccer team's sacrificial ritual. Thanks for checking us out. Please take a look at the rest of our videos and articles.  To...