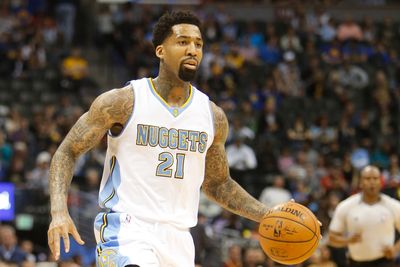 The Nuggets characterized the deal for Chandler as a restructuring of his old contract, which had one year remaining, coupled with the signing of a multi-year extension. Adrian Wojnarowski of Yahoo reported the contract as four years and $46 million.

Chandler averaged 13.9 points and 6.1 rebounds in 31.7 minutes per game last year for the Nuggets, his fourth season with the team. He played in 78 games, starting 75.

It capped a busy Saturday for the Nuggets, who are also reportedly close to finalizing an $11 million, three-year deal for guard Will Barton, who took to Twitter to announce his return to Denver.

A sign of things to come! It’s official baby. Let’s do this @denvernuggets #PTF this for ones they… https://t.co/Sq5IlCoxkd

Just want to take this time to thank GOD & the @nuggets for this opportunity. Not for a second do I take this for granted. #PTF4LIFE

Barton averaged 11.0 points, 4.6 rebounds and 1.9 assists in 24.4 minutes per game in 28 games with the Nuggets after a trade from Portland last season.