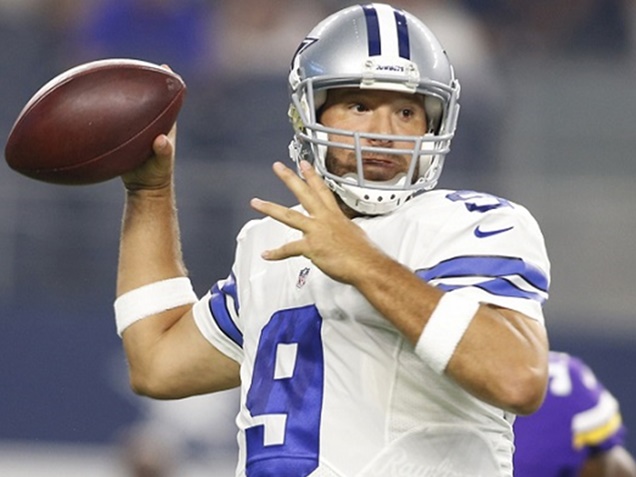 After Tony Romo took to social media announcing that he is unsure what is a head for him and his family, rumors are now questioning if he will retire.

LatinoAthlete.com knows that Tony Romo is undecided about retirement. Tony and Cowboys owner Jerry Jones have a very close relationship, and we know it was a hard decision to cut the veteran quarterback.

We would imagine that Jones would love for Romo to retire in a Cowboys uniform, but there is still the possibility that he may be heading to Houston. Romo has said he wants to keep playing, but after watching the video below we feel he may hang his QB helmet. You can’t ignore the fact that he has had multiple surgeries on his back and will turn 37 next month. Plus he already has jobs that would keep him employed working with the NFL, so it’s basically up to Tony Romo at this point.

Then, there are talks that Romo may be heading to Houston and become a Texans QB. Most likely the Texans will wait for Romo to become a free agency, if Dallas releases him. We have already heard they’re not interesting in a trade for Romo. However, Tony could land on his feet in a great spot since The Houston Texans were able to send quarterback Brock Osweiler off, and release some funds. Brock Osweiler had $16 million in guaranteed money for 2017. Releasing Osweiler would have resulted in $25 million of dead cap. Luckily Cleveland took that deal; clearing the way for Romo. But is Houston turns their backs on Tony, then Denver might swoop in.

Basically, everything is still up in the air for Tony Romo and where he lands. Will he Retire? We he play for another team? Which team will grab him? Will it be the Broncos or the Texans?

At this point, time will tell, because at the end of the day its all up to Tony Romo regardless.

Here is what Tony Romo said:

Thanks for everything cowboy nation. @candiceromo