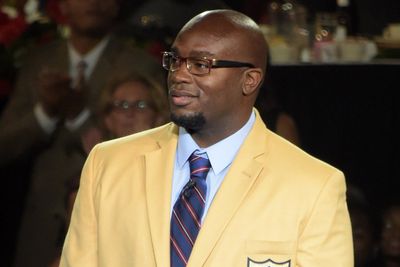 Will Shields was part of a unit as a player, and he deferred congratulations for his success in his Hall of Fame speech by thanking everybody who helped him get to where he is today.

Former Kansas City Chiefs guard Will Shields was inducted into the Pro Football Hall of Fame, and he gave a speech at the enshrinement ceremony on Saturday.

“It’s an honor being named to the Hall of Fame,” Shields said. “Having those 10 letters added to your name. But it takes more than just yourself, it takes a village of people.”

He went on to say that nobody gets to the top by themselves.

“Each man and woman has an opportunity to impact human beings as they walk through life,” Shields said, before going on to thank every single person he could think of thanking. He thanked everyone from his high school coaches, to the man who ultimately gave him a scholarship, to all the coaches who were with him in the NFL, including Joe Gibbs.

“To coach Gibbs, who initially never wanted to draft me. In one year we were together, you created a belief that I could get the job done and do anything. I thank you for that,” Shields said.

He called Dick Vermeil a close friend to this day, and also named Jimmy Raye, Art Shell, Mike Solari and other coaches he wanted to thank, before moving on to his family. He spent the most time on his parents, saying his father is his mentor and someone he tried to emulate, and does even to this day.

Then he thanked “the boss lady,” his wife, thanking her for “putting up with me.”

“I know there’s a lot of people I didn’t get a chance to thank,” Shields said, wrapping up, “I apologize for those I didn’t get to mention. I’m standing here today because of each of you.”

A third-round pick by the Chiefs in 1993, Shields was regarded as one of the steals of the draft at the time. He didn’t start his first career game, but when Dave Szott went down with an injury in that game, Shields stepped into a starting role and didn’t miss a single game for the next 14 years. He started 231 consecutive games (including playoffs), the second-longest active streak at the time after Brett Favre, and he went to the Pro Bowl every year from 1995-2006.

LatinoAthlete Staff - September 7, 2015
0
The Seattle Seahawks trade Christine Michael to the Dallas Cowboys. We take a look at the fantasy implications. After signing Fred...