One of the most anticipated rematches in boxing history lived up to the hype this past weekend. While there may have been some controversy, and continued debate since then, Saul “Canelo” Alvarez (50-1-2, 34 KO’s) has solidified his legacy after getting a majority decision win over Gennady “GGG” Golovkin (38-1-1, 34 KO’s) to claim a good share of the world’s middleweight championships. The judges gave two scores of 115-113 for Alvarez, followed by a 114-114 draw, which again has fans and those involved in the sport debating about issues within the scoring system. While I personally scored the bout 117-115 for GGG, I am not a judge therefore my scoring had no effect on the outcome.

The outcome that did take place however resulted in Alvarez retaining the Lineal middleweight title, as well as be re-awarded the Ring Magazine middleweight belt, and taking the WBC, WBA, and IBO belts from Golovkin who has now lost his first pro fight. Alvarez only two more world titles away from being the undisputed world middleweight champion. And because of that there are quite a few possibilities that stand as future opponents for Mexico’s Alvarez. He probably won’t fight again until 2019, but there are some who are already lining up to get a piece of the new champion.

Here are five potential future fights for Canelo Alvarez in 2019…..

A third fight with Golovkin-

This is the most obvious choice, especially since both Golovkin and many others feel that he won Saturday’s fight. GGG was so upset after the loss that he left the ring before HBO could interview him post-fight, not something that GGG usually does. Golovkin and his team are especially upset by the judges decision as they feel that Canelo truly is a cheater who uses PED’s. There was plenty of trash talking leading up to this fight, but in the end Alvarez walked away with the gold. Besides, every great boxing rivalry usually has a trilogy.

Current champion Billy Joe Saunders (26-0) is set to travel to Boston in October to defend his share of the middleweight crown against American Demetrius Andrade who’s making just his third fight in this weight class. Saunders, who’s a heavy favorite to retain, has said time and time again that he wants the winner of the Alvarez/Golovkin fight. He’s never fought either man, but nearly came close to signing a deal to fight GGG earlier this year while Canelo was serving his PED suspension. Saunders -who was born in England- has said repeatedly that the road to being the undisputed champion goes through him. Perhaps it’s time to test that theory.

Although a fight to crown a new champion is scheduled for October, this championship currently remains vacant after the IBF stripped Golovkin of the belt earlier this year. The belt was taken from him after he refused to face a mandatory challenger in the wake of Alvarez getting suspended. This belt is the final piece to becoming the undisputed champion, and I don’t think it would be bad idea to give Alvarez a title shot in 2019.

The New York native is a former titleholder (WBA) and he was the first man to last a full 12 rounds with Gennady Golovkin. Jacobs will be among those fighting for the vacant IBF belt in October, and he has stated that he wouldn’t mind facing the Alvarez/Golovkin winner either. Jacobs most likely walks away with the belt next month, so why not have Jacobs vs Canelo sometime next year?

The 29-year-old French-Canadian was featured on the Canelo/GGG 2 undercard and scored a first round knockout win over Ireland’s Gary O’Sullivan. Lemieux (40-4) has held multiple middleweight championships at both the regional, continental, and world levels. He’s faced both Golovkin and Saunders (both losses), and has been pushing for a fight with Alvarez for quite some time. Lemieux has proven himself to be among the world’s best middleweights, and he’s done pretty well for himself against Mexican fighters (17-1). I would definitely pay to see this fight.

2019 will be another interesting year for the middleweight division. 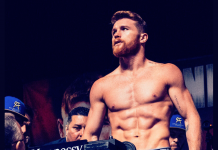