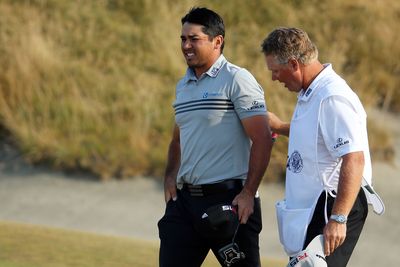 Before we take in the final round of the national championship, let’s sift through what we learned from this world-class leaderboard at this new venue on Saturday.

Well that was fun. The third round of the 2015 U.S. Open may not have produced low scores, but what it lacked in birdies it made up for in drama. At a few points during the penultimate round at Chambers Bay, the last groups of the day appeared to be dueling without even knowing they were dueling. The leaderboard shifted around throughout the day until we ended up … well, about where we started — albeit with scores that moved closer to even-par for the championship.

Saturday saw Jordan Spieth open by dropping in a couple bombs on Nos. 2 and 3 for birdie. There was Dustin Johnson coming out firing on all cylinders over the first nine holes before stumbling and hanging on for dear life on the last nine. Jason Day decided to tee it up less than 24 hours after collapsing on the 9th hole with vertigo and started off with a shaky 37 on the front nine. All he did was finish the final nine in 31, the best back nine score of the tournament, to work his way into the final pairing.

The leaderboard is set up for Sunday, with four players entering the final 18 at 4-under and anchoring the final two tee times of the week. Who needs Tiger Woods, Rory McIlroy and Phil Mickelson anyway? Sit back and enjoy these four going at it on Sunday at Chambers Bay.

A few notes from the course on Saturday:

I said to him, I said, They’re going to make a movie about that round. It was pretty impressive, it was up there with Tiger Woods playing with a broken leg at the U.S. Open. It was very impressive.

Maybe not the movie part, but you never know. There is an argument to be made about Day’s third round being up there with Tiger playing on one leg. More than once, I heard media members talking about how it might’ve been better if Day rolled his ankle. An injury is one thing to deal with and tough out, but there’s no toughing out vertigo. At any moment, Day could’ve gone down again. He played like he was worried about turning his head or looking down, and his caddie said as much after the round. He considering withdrawing multiple times during the round.

That he managed to post a 68 on this course under ridiculously tough conditions is beyond impressive. Now we wait to see if he can do it one more time. It would be a hell of a story, the best of the year in golf.

Crowdsourced caddying is a million-dollar idea. Sit in the grandstands on one hole long enough and the nuances of the fairways and greens start to become apparent. Every player that comes through is a data point, and by the afternoon those fans that have been sitting in one spot can pretty much caddie the hole.

This led to some funny moments on the 16th, like a ball hitting once on the left side of the green off the tee on the par-4, and a fan yelling “NOPE.” The ball rolled all the way across the green and into the bunker.

Finally, in one of the last groups of the day, fans on No. 16 appeared to take it one step further. As a player well short of the hole surveyed the green, the crowd played a Price is Right game. Player stands on the green surveying a landing spot; crowd murmurs no. Player starts walking back toward the bag; crowd continues its “no” murmurs. The player eventually made his way to a landing spot that was suitable to the crowd, and it responded with cheers.

The shot still came up short, though.

The 16th hole got … interesting. Despite its listed 370 yards, the 16th was also fairly drivable on Saturday. Every player I saw on the hole went at it with driver, and some even ran it all the way through the green. Which is why it was odd to see Patrick Reed tee it up as Dustin Johnson and Branden Grace were putting. The players heard the sound of the driver, looked up, and shuffled away from where they were as the ball landed in the green side bunker (both Johnson and Grace made disappointing pars on the hole).

Jordan Spieth, playing second on the 16th in the final group, was held up by the marshal moments later so as not to also hit into the group in front of them.

The finishing stretch at Chambers Bay is an amazing atmosphere. For all the talk about the difficulty of watching golf at Chambers, the 16th, 17th and 18th holes are a great experience and will make for a fun end to the tournament.

The par-4 16th has grandstands short of the green and another set behind it. The 17th is like a mini 16th-at-TPC Scottsdale hole. It’s not on the same scale, because nothing is, but there’s a similar effect. Large grandstands surround the green and fans line the side of the hole from tee to green. And the roars are piercing.

Oh, and that finishing hole? Just half a baseball stadium’s worth of fans surrounding the green. There’s nothing like 18,000 people around the green on the final hole of the day. If it comes down to that last green, it’s going to be a wild scene.

There’s a big number for someone(s) on 18, too. Barring a last-minute change, the 18th is going to be a par-4 on Sunday. A long par-4 that the players voiced their displeasure about after the second round. When it’s a four-shot hole instead of five, there’s zero margin for error from the tee until the putt rattles home. At least on Thursday and Saturday, a layup was a viable option.

Instead, this is what players will have to deal with on Sunday. There’s the landing zone off the tee that, in relation to the hole, is the size of a postage stamp and guarded by plenty of bunkers. There’s the uphill second shot that has to be pinpoint because of the size of the green, as well as the three tiers and various ridges that nudge players towards four-putting. And that green? It’s fast, and there’s so many ridges that it’s hard not to have a putt with a huge amount of break.

Spieth doubled it on Friday and is considering playing the 18th by going up the 1st fairway if need be on Sunday. Birdies could be hard to come by, and the big number is definitely lurking.

The Australians got Meat Pie. It seemed odd that a couple members of the Aussie contingent were bringing a big cooler onto the shuttle to Chambers Bay on Saturday morning. “Meat pies for the Australian players,” they said when security gave them a puzzled look. An Australian chef had made them, and they were delivered to the course for the players to have a taste of home for dinner following their rounds.

Support your local paper. Or, in this case, support the local paper covering the U.S. Open. Chambers Bay is in the Tacoma News Tribune’s backyard, and the staff there has taken advantage of it by leaning on its local knowledge and spending years preparing for the tournament. It shows.

Golf/preps/Swiss Army Knife reporter Todd Milles knows just about everything there is to know about the course and local scene, and The News Tribune unleashed a small army of reporters onto the grounds at Chambers Bay this week. The amount of planning, attention to detail and storytelling have been an outstanding resource throughout the tournament.

The NFL is going to take better care of its balls