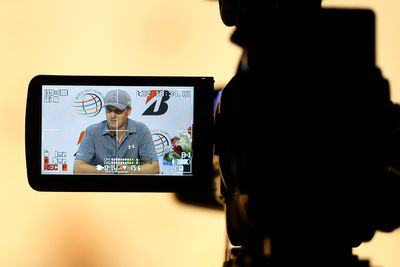 Before football takes over your life, enjoy two of the bigger weeks on the golf calendar starting Thursday at the WGC-Bridgestone Invitational.

After two quieter weeks, the PGA Tour tees off Thursday in Akron and starts its final big stretch of the season. The WGC-Bridgestone Invitational always attracts the top players in the world, who have no problem playing the week before a major when it’s for this much cash and this many easy world rankings points. Every star who is able plays at Firestone each year, but unfortunately, the world No. 1 is still resting his ruptured ankle ligament and will not defend his Bridgestone title. Rory McIlroy is one of two inside the top 50 in the world rankings who aren’t playing, and he should announce in the next couple days whether he’ll make a sooner-than-expected return next week at the PGA Championship.

Even with Rory absent, the field is still loaded and it’s likely next week’s major winner is somewhere in this group. Jordan Spieth is the obvious headliner and favorite to win his first ever WGC title. He said earlier this week he’s approaching this final stretch — a WGC, a major, and the FedExCup playoffs — with “revenge” on his mind after coming so close to winning an Open Championship at St. Andrews. Spieth is still the hottest player in the world and he could overtake that No. 1 spot with a win. That someone has played so well to even bring that into play is amazing given the grasp that McIlroy — winner of two WGCs and two majors in the last 12 months — had on the overall top spot.

Spieth will be out in the afternoon side of the draw on Thursday, going at 2:15 p.m. ET with Zach Johnson. So viewers will have no issue watching his every shot. It’s the morning wave, when you’re all stuck at work, that may present a problem. This is the first big tournament that consumers will encounter the Tour’s new PGA TOUR Live service, which puts a paywall up for that normal “featured group” stream they used to have on their “Live At” service in recent years. It’s now a $4.99 per month subscription for PGA Tour Live, which will show two featured groups in the morning on Thursdays and Fridays throughout the PGA Tour season. Spieth will be behind that paywall on Friday. Rickie Fowler, Jason Day, Bubba Watson, and Dustin Johnson are the big names on that stream in the first round.

In the afternoon, the stream flips to focus on featured holes at the par-3 15th and par-4 17th. That stream should not be behind a paywall. Golf Channel will also have a simulcast stream up and running of their TV coverage, which goes live at 1:30 p.m. ET.

Here are all your media options for the opening 18 in Akron: