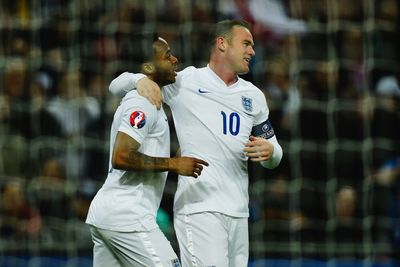 The Manchester United star now has more goals than anyone in England’s history.

Wayne Rooney is England’s new all-time leading goal-scorer. He tied the record in his 106th appearance — the exact number of times the old record-holder, Bobby Charlton, played for England — then broke it one game later.

Rooney tied the record with a goal from the penalty spot in Saturday’s Euro 2016 qualifier against European minnows San Marino. He converted a penalty in the 13th minute to tie Charlton, but was substituted before he could score again. He got the start on Tuesday against Switzerland and set the new scoring record in the 84th minute, scoring a penalty drawn by Raheem Sterling.

The first goal of Rooney’s England career came in his 6th cap, in a Euro 2004 qualifier against Macedonia. At 17 years and 317 days old, Rooney became England’s youngest goal-scorer. He went on to be the breakout star of Euro 2004, scoring braces against Switzerland and Croatia, which earned him a transfer from Everton to Manchester United.

Though Rooney has been criticized throughout his career for his inconsistency and failure to reach the potential he showed at Euro 2004, he’s still one of the country’s most accomplished players ever. He hasn’t achieved any more or less internationally than any England player since the 1960s, and unless the next generation of England stars becomes the 1960s Brazil or 2000s Spain of their day, he’ll be remembered as one of his country’s greatest ever players.

LatinoAthlete Staff - July 11, 2015
0
UFC 189 will conclude Saturday night in Las Vegas with the crowning of a new champion, as Chad Mendes and Conor McGregor meet for...