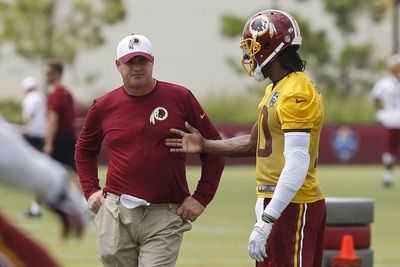 Robert Griffin III is reportedly in the middle of yet another coach vs. owner disagreement.

Washington coaches and “high-ranking” front office officials want to move on from quarterback Robert Griffin III, according to a report from ESPN. However, per the report, team ownership is not on the same page.

Griffin was named the team’s starting quarterback this offseason, but he struggled in the preseason and sustained a concussion in the second game after taking multiple big hits. The team originally announced that he would remain the starter once cleared, and then announced later that he was in fact cleared. However, an independent neurologist suggested Griffin be held out for the remainder of the preseason and into the regular season.

Washington insists they handled Griffin’s concussion “by the book.”

This has given Kirk Cousins the chance to show the team he deserves the starting job, and he is outplaying Griffin in the preseason. It seems likely Griffin is no longer the team’s starter even when he does return, and there has been a “groundswell of support from a strong segment of football people within the organization” to move on from Griffin and go with another player on the roster as starter, according to the report.

Not only that, there have even been trade conversations with a few NFL teams, but there has been no interest in getting a deal done.

Another report from Mike Florio of Pro Football Talk cites his own sources, claiming the opposite, that “no schism exists between owner Daniel Snyder and the people he has hired to run the football operations regarding the status of quarterback Robert Griffin III.”

The PFT report cites three separate sources that basically said everything about the ESPN report was untrue and totally made up. It suggests that a long meeting between general manager Scot McCloughan and Snyder was misconstrued and was actually about Griffin’s concussion situation and what exactly happened with him being cleared to play prematurely.

As the ESPN report notes, the team exercised its fifth-year contract option on Griffin, which guarantees him $16.1 million in 2016 if he’s on the roster next season. Until then, he’s only guaranteed against injury. It would be fair to suggest Griffin has been relatively injury-prone in his NFL career thus far, which is hardly surprising given the state of Washington’s offensive line.

Any game in which they play Griffin would put him at risk for injury and put the team on the hook for Griffin’s contract in 2016. Despite his potential, Washington’s coaches and front office seem ready to start fresh given the circumstances, if the first report is to be believed. This wouldn’t be the first time Griffin has had the support of the ownership and the ire of a coach, as the three-way struggle between Griffin, Dan Snyder and former head coach Mike Shanahan was an ongoing saga for months. That saga ended with Shanahan being fired and Griffin remaining with the team.

Manuel Frias - December 15, 2016
0
There will not be another NBA lockout next year, as the NBA and NBAPA reached an agreement on a new Collective Bargaining Agreement. The...