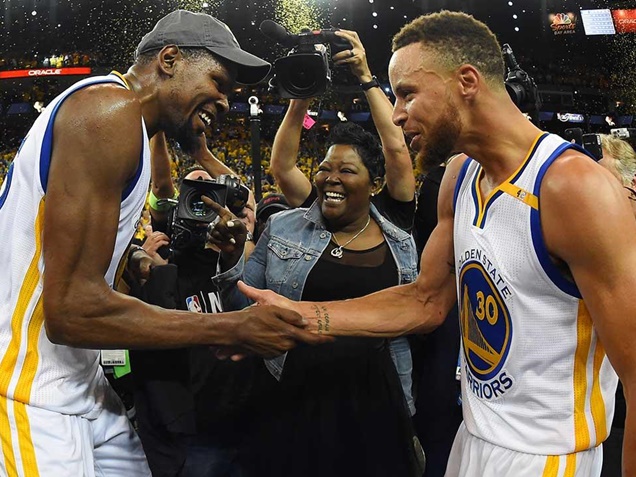 The Golden State Warriors did it! The Warriors beat the pants off of the Cleveland Cavaliers, then decided to skip the traditional championship White House visit.

Do you blame them, who wants to meet President Trump. Read on and see why the Warriors unanimously voted against their traditional White House visit…

LatinoAthlete.com has leanrned that the whole team said “NO” to visiting the White House where “billionaire reality star,” Donald Trump tries to be the President of the USA.

Less than 24 hours after winning the 2017 NBA Finals, the Warriors unanimously voted to decline the expected White House invitation.

On Tuesday, the Golden State organization addressed the issue Tuesday with a statement which reads as follows:

“We have not received an invitation to the White House, but will make those decisions when and if necessary.”

That is untrue. The blue and gold NBA players were invited to Washington by U.S. Rep. Nancy Pelosi (D-Calif.), whose district includes the San Francisco Bay Area.

Nancy posted this invite to the team via Twitter:

When it came to the outspoken veteran forward David West, he made it clear of his disapproval of President Donald Trump, by telling the Undefeated’s Marc Spears, that he’ll more than likely decline the opportunity.

West made it clear where he stands by saying:

Josh Brown posted on Twitter that the Warriors declined the invite to the White House.

This year, the Warriors rejection of the White House’s invitation builds on the sentiment expressed by several New England Patriots who announced they would not attend the Trump White House ceremony in April.

Watch the memorable moment for the Golden State Warriors:

LatinoAthlete Staff - July 6, 2015
0
The Bucks have also denied reports of front office changes this summer. Point guard Beno Udrih will be back with the Memphis Grizzlies...