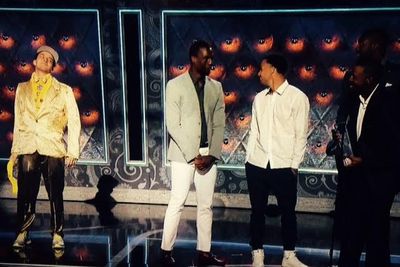 The NBA champs love their fans so much, they let one dance on stage.

At the inaugural NBA Players’ Awards aired on Tuesday evening, the Golden State Warriors’ Oracle Arena won the award for best home court advantage. To honor their raucous support, Steph Curry, Andre Iguodala, Harrison Barnes and Festus Ezeli allowed one of their fans to come on stage and celebrate.

The @warriors apparently let a fan celebrate with them after their arena was named the best home #PlayersAwardsBET pic.twitter.com/P9f1qdTdZ6

He definitely got hyphy for the Bay.

MMBM: Too many men in the huddle

LatinoAthlete Staff - August 3, 2015
0
The week's most important NFL column is back, folks. We're required to remind you that these strong takes are SATIRE. Sorry, not sorry....