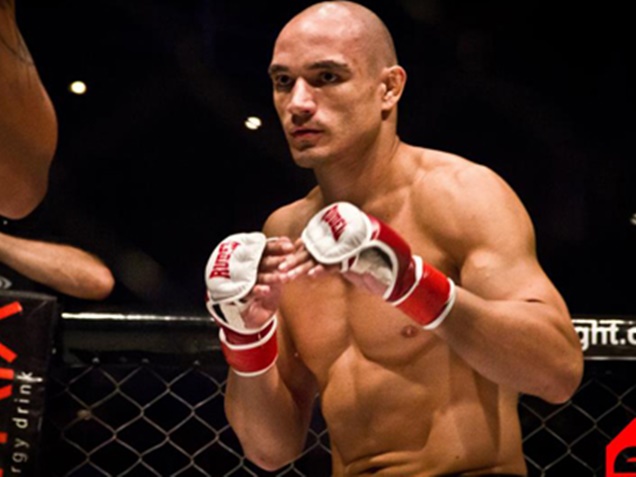 Vitor Miranda road back to the Octagon was a long, tough process. Thirteen months later, the Brazilian middleweight is facing Marvin Vettori at UFC Fight Night 112 in Oklahoma City Sunday.

Learn how Vitor Miranda overcame weight gain, depression and more to get himself back in shape to fight again. Read on…

Vitor Miranda, these days, the kickboxer is standing tall at 6′ 1″ 185 lbs and ready to fight Marvin Vettori on Sunday, LatinoAthlete.com has learned.

However, his road back to the Octagon didn’t come easy. The TUF Brazil heavyweight runner-up pushed forward after injuring his shoulder on a bench press. He admits that he was hungry for more wins, so he ignored signs from his body, not stopping.

“It was a series of small injuries piling up, developing a chronic pain that wouldn’t let me do anything. It was painful, but I was so close to the fight so I decided to fight anyway.”

Still ignoring the signs Vitor continued to fight, so when the UFC offered him a fight against Camozzi for May, he took it. He ended up losing by unanimous decision.

“I didn’t pay attention to the pain, I thought I’d get better, but it only got worse and worse. I couldn’t even hold my daughter. After the fight, I stopped everything for two months to heal, but when I came back to the gym, the pain came back as well. The doctor told me the pain would only go away if I had surgery.”

What changed Vitor Midanda mind to get Surgery?

After listening to his doctor and agreeing to undergo shoulder surgery he realized how “dumb” he was for postponing the inevitable.

“I’m glad I did the surgery. Fighters are dumb, we only worry about fixing it when the damage is done.”

What he didn’t realize is after his surgery he “was developing a depression” and the sad part about it was that he “had no idea.”

“The injury didn’t allow me to train, I actually thought I wouldn’t fight anymore, but the doctor said ‘it’s just an injury, and that’s messing up with you and your mind.'”

Next, Miranda said with a laugh:

“Vitor gained a lot of weight. I faced it as vacations because I was active for years, non-stop, especially after I started competing in MMA. [he REALIZED] it was like okay, I’ll eat anything, stay at home or maybe travel somewhere, do everything I want. Do everything with no guilt, because sometimes you’re injured.”

It wasn’t until he got back into the gym and started eating right for things to change for the better.

“My coach asked me how much I weighed, and I said ‘look, I can start my regular diet when I lose some 17 pounds’ [laughs]. But it was easy. Since I already knew it was possible to make 185, it was easy.”

Going through all the ups and downs outside the Octagon for almost a year became extra motivation for Miranda. He goes on to reveal:

“I had this time off, and now I have the pressure to come back and bounce back. It’s natural. My body and my mind are hungry for this again, to evolve.”

On June 25th, the 38-year-old fighter will battle the young Italian talent Vettori, who is looking forward to fighting the 15-year younger MMA fighter.

Vitor Miranda is on a new level these days, he is “focused on winning” with a “pressure-free” attitude, especially now since he’s “100 percent well trained.” The Brazilian kickboxer and MMA fighter is sure to “come out with another knockout to recuperate” his record.

“I’m certain that I’m better in every aspect. On the ground, he won’t be able to control me. And I may be able to surprise him there. I won’t be as defensive as I’ve been with other athletes, who I knew were better than me on the ground. Marvin is at my level on the ground, and in wrestling. So I can go forward. I’ll be ready to take him down, as well.”

PUNTAGRAMS: A series of charts exploring the evils of punting

LatinoAthlete Staff - September 8, 2015
0
Punts are fundamentally sinister. Every single one. Hundreds of them plagued Week 1 of the college football season. Here, we chart the horrors and...