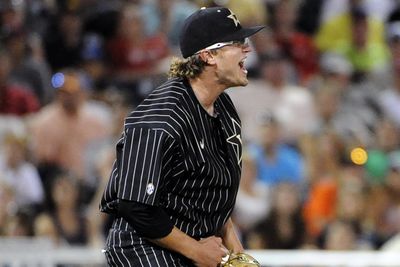 A sizzling outing from Carson Fulmer and a late offensive kick has Vandy a game away from its second title in as many years.

For 5 2/3  innings, Virginia’s Connor Jones was everything his team needed him to be. The sophomore righty — pressed into service by the unavailability of the veteran members of the staff — held serve with flame-throwing Vanderbilt ace Carson Fulmer, keeping the game knotted at 0-0 into the bottom of the sixth.

But the defending champs could only be kept off the board for so long. With a tiring Jones’ pitch count climbing over 100, the Vandy bats finally caught enough traction to break the game open in the sixth, handing the Commodores a 5-1 win and putting them on the brink of a second consecutive national title.

It was in the sixth inning that the floodgates finally opened for the Dores, who had managed just three hits to that point. Jones opened the frame with two quick outs, but an infield single and a walk put two men on. On a team stacked with returning vets, it was freshman Will Toffey who found the big hit.

THE DORES ARE ON THE BOARD!!! Will Toffey delivers a 2-out, 2-run double for Vanderbilt! #CWS http://t.co/801vHHhYeU

The Dores added three more in the seventh to turn what had been a taut pitchers’ duel into an easy win. Virginia finally got on the board in the top of the ninth, but it was too little, too late.

There is a silver lining here for Cavaliers fans. Jones was able to carry his start into the seventh, taking pressure off a thin pitching staff. And the fact that Virginia fell behind in the sixth — as opposed to the eighth or ninth — meant shutdown reliever Josh Sborz didn’t get burned.

Still, Brian O’Connor’s club heads into Tuesday with a far from ideal pitching setup. Because it was pushed to an extra game by Florida last Saturday, Virginia had to use top option Brandon Waddell, meaning he’ll be — best-case scenario — available for a few innings in a potential Game 3. And Nathan Kirby, the ace who made his long-awaited return from injury last week, probably isn’t in shape enough to do much on short rest.

Vandy, on the other hand, had an extra day of rest after clinching a spot last Friday and came into Monday fully stocked. After Fulmer’s lengthy spot, they’re still in pristine condition. They’ll try to close it out with Philip Pfeifer on Tuesday, and can come back with first-rounder Walker Buehler if Virginia forces a Game 3.