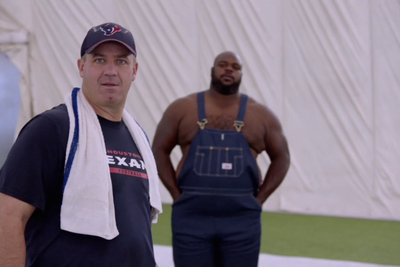 Vince Wilfork, frequently hilarious dude, is a member of the Houston Texans. The Houston Texans are being featured on HBO’s Hard Knocks this year. Obviously that was going to add up to something even more awesome than bubbling shoes eventually.

Aaaand there it is. On Tuesday night’s episode, Wilfork showed up to practice in overalls, cowboy boots and a cowboy hat because, well, because he wanted to I suppose. You can pretty much where whatever you want when you’re built like a meaty F-350.

The team found it hilarious, even before Coach Bill O’Brien knew what was going on. He found it just as hilarious when he figured it out too.

Let’s just give him his own show.