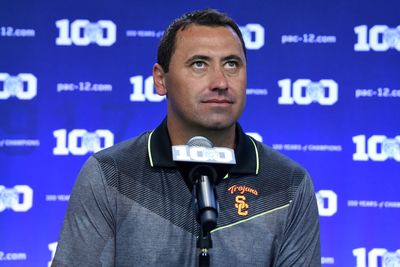 That’ll sweat the hangover out!

USC head football coach Steve Sarkisian spoke publicly on Tuesday for the first time since apparently being drunk at a donor event on Saturday night.

One detail stood out.

Kessler says Sark asked the team to give him punishment like he would them — which was up-downs. “He came back drenched in sweat.”

Here’s what an up-down is:

Sarkisian had released a statement on Sunday apologizing for his behavior, but clarified his version of what happened that night.

Sark: “I took medication, mixed it with alcohol — not a lot, fortunately — and I responded in a way that was not acceptable.

Steve Sarkisian: “The moral of story is this: when you mix meds w/alcohol, somethings you say things or do things you regret”

Sarkisian will be entering treatment, although it doesn’t sound like that’s entirely his idea.

Sark says he does not have a drinking problem but is going to treatment. “I don’t know if I even need rehab but it’s sort of the process.”

USC’s team alcohol policy will also change after the incident.

SB Nation presents: Time for the Pac-12 South to take over the conference

Dota 2 The International results: EHOME stuns with win over Team...