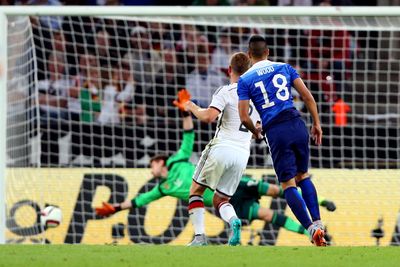 Bobby Wood is the United States’ hero again. Improbably, he scored yet another late winning goal against a top opponent, this time sinking Germany, 2-1.

The United States head into Wednesday’s friendly with world champions Germany on the back of a couple of excellent victories over Mexico and the Netherlands, and coach Jürgen Klinsmann will no doubt be gunning for a good result against his fatherland. It certainly isn’t  out of the question, with recent slips against the Republic of Ireland and Australia showing that Die Mannschaft aren’t quite as scary as that nickname seems to suggest.

What’s more, given that they’re only playing Gibraltar in Euro 2016 qualifying during this international break, Germany coach Joachim Löw has taken it upon himself to experiment with his squad selection. Manuel Neuer, Thomas Müller, Toni Kroos, Marco Reus and Julian Draxler are all out, with opportunities awaiting rather more inexperienced players like uncapped Gladbach midfielder Patrick Hermann.

It’ll be difficult, but certainly not impossible for the USA.

Bradley failed to impress at last summer’s World Cup, which was made all the more disappointing with the knowledge that he can be the USMNT’s most valuable player when on form. Fortunately, his display in the recent victory over the Netherlands suggested that he may well be getting back to somewhere near his best — something he’ll look to reaffirm in Cologne. His long-range passing will be vital to triggering counter-attacks, and he’ll have to be resolute defensively to stop the USA from being overrun through the middle.

Key question — How will the the United States’ inexperienced attack fare?

The five nominal attackers in this USA squad have only 47 caps between them — that’s less than half the amount Bradley has amassed since making his debut nine years ago — and have scored a combined total of just nine goals at international level. It’ll be interesting to see if any of them manage to put in a stand-out performance against a strong defense in this match.

Manuel Frias - December 16, 2016
0
A few days after 10 Minnesota Golden Gophers football players were suspended from the team’s upcoming trip to the Holiday Bowl, the rest of...