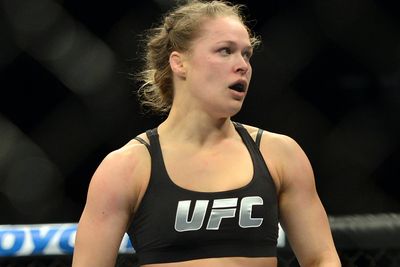 Heavy betting favorite Ronda Rousey looks to continue her string of dominance in the main event of UFC 190 against Bethe Correia on Saturday.

UFC superstar Ronda Rousey is 11-0-0 over the course of her professional career so far, and each of her last three fights have been over in 66 seconds or less. Rousey headlines UFC 190 in Rio de Janeiro squaring off against Bethe Correia in the main event on Saturday.

Rousey is an overwhelming favorite at -1600 to remain undefeated at sportsbooks monitored by OddsShark.com. While Correia is also undefeated at 9-0-0, she doesn’t have any signature wins on her resume. With only two knockouts under her belt, Correia likes to wear opponents down over a long match; a style that most fight analysts believe will put her at a big disadvantage against Rousey. Correia would pay +800 if she could pull off the upset.

While the light heavyweight battle comes well past both fighters’ primes, the Mauricio “Shogun” Rua vs. Antonio Rogerio Nogueira fight should be a fan favorite in Rio de Janeiro as both fighters hail from Brazil. Rua has lost four of his last five fights, but is still a dangerous striker with 19 of his 22 career wins coming by knockout. This will be Nogueira’s fourth fight since December 2011, and he is 2-1 over his last three outings.

Stefan Struve was a rising star in the heavyweight division before suffering back-to-back knockout losses to Mark Hunt and Alistair Overeem. Struve will try to get back on track against Antonio Rodrigo Nogueira, who has lost three of his last four fights. Both heavyweights are submission specialists, setting the stage for an interesting strategical fight.

LatinoAthlete Staff - August 23, 2015
0
A normally quiet golf weekend has become must-watch on Sunday as Tiger Woods goes for his first win in more than two...