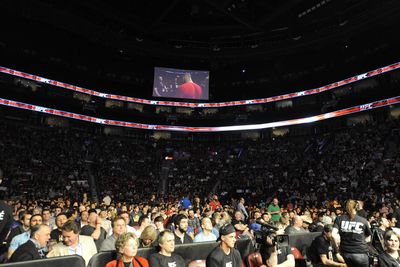 The two fighters were originally scheduled to collide more than six months ago; however, Velasquez suffered (another) injury in training and was forced to withdraw from the bout. Werdum would go on to knockout late-replacement Mark Hunt instead, winning the interim strap that was introduced because Velasquez has been unable to defend his belt since Oct. 2013.

Tonight, finally, “There can only be one!”

Cain Velasquez vs. Fabricio Werdum will headline the UFC 188 five-fight PPV main card that will start promptly at 10 p.m. ET. In addition to the Heavyweight stars, another pair of champions — albeit from different mixed martial arts (MMA) promotions — Gilbert Melendez (Strikeforce) and Eddie Alvarez (Bellator) will square off in a co-main event that has been literally years in the making.

The remaining three UFC 188 main card matches on PPV all feature a blend of Hispanic flavor that will appeal to the local audience, including a pair of Hispanic winners of the promotions The Ultimate Fighter (TUF) franchise Kelvin Gastelum (who fights Nate Marquardt) and Yair Rodriguez (who battles Charles Rosa). Kicking off the PPV is a women’s Strawweight match between Angela Hill vs. Tecia Torres that could have 115-pound No. 1 contender implications if the latter is successful.

As is always the case, UFC will also deliver a complete “Prelims” undercard that this time features seven bouts, four of which will air on FX Network (not FOX Sports 1), beginning at 8 p.m. ET and the remaining duo on its subscription-only online digital network, “Fight Pass,” starting at 7 p.m. ET.

Below are the numerous ways in which you can watch UFC 188: “Velasquez vs. Werdum” tonight:

You can also watch UFC 188 through your television or set-top box, including AppleTV and ROKU, as well as through a video game console such as PS3 or PS4.
SBNation.com combat sites will also cover the entire event, for free, in our live UFC 188: “Velasquez vs. Werdum” thread here and here, updates for which will begin with the first fight at 7 p.m. ET and run right through the main event that will likely end some time after midnight.
In the meantime, to get up to speed on all things UFC 188, including previews, predictions, interviews, breakdowns, analysis and so much more be sure to check out the most comprehensive collection of stories available anywhere for Velasquez vs. Werdum.