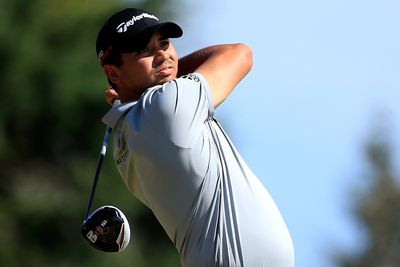 It didn’t look like Jason Day would be able to play the weekend at the U.S. Open, but after an incomprehensible third round finish, he’ll play in the last tee time Sunday at Chambers Bay.

We’re all set up for an incredible Sunday at the U.S. Open. The final pairing will feature Jason Day, the Aussie who stole the crowd and the show battling through vertigo on Saturday, and Dustin Johnson, probably the most naturally talented American in golf. Tied with them at 4-under are Branden Grace and Jordan Spieth, who is trying to become the first player since 2002 to take the first two majors in a year. They will play one hole ahead in what should be a wild primetime finish at Chambers Bay.

Day became the story of the third round with his birdie-birdie finish. After collapsing on his final hole Friday, Day’s championship seemed in doubt. He spent several minutes completely motionless down on the turf before getting up and shakily finishing up his final green. But Saturday, a full five-hour 18-hole round seemed much more daunting — especially after how he looked being helped off the course just 24 hours prior.

Day did not look himself throughout the third round, making movements deliberately and just trying to keep it together. His caddie Colin Swatton called it the best round he’s ever seen and that there were several moments the Aussie wanted to quit. But there he was at the 17th and 18th greens, pouring in back-to-back birdies to get into the clubhouse at 4-under.

As the 36-hole lead of 5-under came down behind him, it became clear that Day would get a spot in that final pairing.  If there are more than two tied at the top, the first players into the clubhouse in the prior round get the later tee time the next day. So it will be Day and Johnson anchoring the tee sheet at 6 p.m. ET, setting up a finish around 10:30 p.m. on FOX.

Here’s the full tee sheet for Sunday’s final round:

LatinoAthlete Staff - August 30, 2015
0
Jose Aldo has been dominating the ranks of the featherweight division for the past seven years, establishing himself as one of the pound-for-pound best...