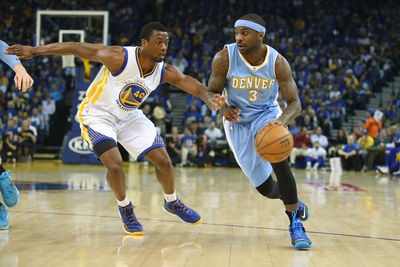 It’s the third drinking and driving related offense for the Nuggets point guard.

Ty Lawson was arrested for DUI in Los Angeles on Tuesday morning for the second time this year, according to TMZ. Lawson was pulled over by police officers for speeding around 2:30 a.m. on the 101 Freeway and proceeded to fail the field sobriety test.

This is the third drinking and driving related offense for Lawson. He was arrested in January for a DUI in Denver. He was also arrested for underage drinking-and-driving in college at North Carolina in 2008. His BAC was under the legal limit then, but he was just 20 years old.

Lawson has two years and $25.5 million remaining on his contract. The Nuggets used the No. 7 pick in the 2015 draft to select point guard Emmanuel Mudiay.

The 27-year-old Lawson averaged 15.2 points and 9.6 assists per game last season for the Nuggets. He’s spent his entire career in Denver after being selected No. 18 overall in the 2009 draft.

LatinoAthlete Staff - August 28, 2015
0
Being a NASCAR team owner isn’t cheap, offers little financial reward and comes with a high risk of failure. The adage has...