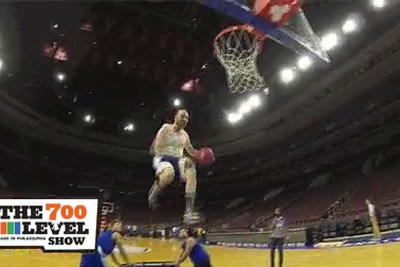 If you’ve ever been to a NBA game, you’ve probably witnessed one of the trampoline dunk performances where a team of players performs high-flying, acrobatic dunks as in-game entertainment. It’s easy to scoff and not be impressed, thinking anyone can dunk off a trampoline. That may be true if you’re supremely athletic or gymnastically inclined.

The Evster from The 700 Level Show on Comcast Sports Network took a turn at trampoline dunking and proved it’s not as easy as it looks.

Although he failed on most of his dunks, his attempts were spectacular and arguably more entertaining than the made dunks. The homemade Seattle Sonics Shawn Kemp jersey was a wonderful touch, as well. There were even more missed dunks (and some really impressive made dunks by others) in the full segment from CSNPhilly.

LatinoAthlete Staff - September 3, 2015
0
Domonic Brown had another moment Philadelphia baseball would want to forget. It's been an ugly season for the Philadelphia Phillies. And...