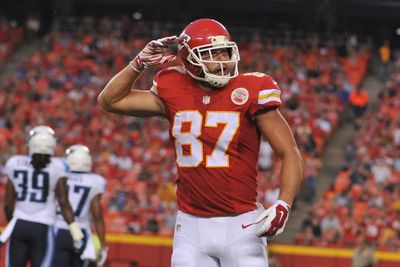 Travis Kelce will be ready for Week 1 after a minor ankle scare in preseason. We break down the fantasy implications.

Kansas City Chiefs tight end Travis Kelce was at practice Monday seemingly without limitations. Head coach Andy Reid confirmed that Kelce will be “good to go” for the Chiefs’ Week 1 opener against the San Diego Chargers.

Kelce tweaked his ankle in practice last week, but it was never considered a serious injury. Reid later stated that Kelce had a “slightly” sprained ankle and wouldn’t be missing any game time. Kelce is coming off a 67-862-5 statline in his first year as a full-time starter. He missed the entire 2013 season with microfracture surgery.

Fantasy implications: Kelce created some panic on social media when the ankle injury was first reported, but he should be 100 percent in time for the regular season. Kelce has real breakout potential this season and should be one of the top tight ends in all fantasy leagues. Barring a setback with the ankle, he’s an easy TE1 start against San Diego next Sunday.

LatinoAthlete Staff - September 7, 2015
0
Gerrit Cole and the Pittsburgh Pirates played the St. Louis Cardinals on Sunday night. Sadly, the Pirates pitcher didn't get off to...