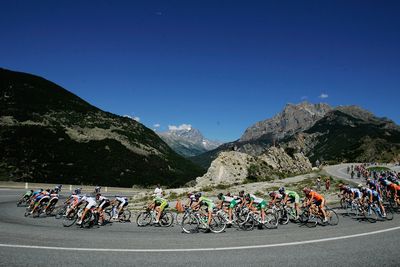 Rest time is over: Riders will go over the highest point of the Tour de France on Wednesday as they enter the Alps.

We made it to the Alps! To welcome the occasion, race organizers plotted Stage 17 to climb to 2,250 meters — the highest point of the 2015 Tour de France. Col d’Allos doesn’t rival any of the major Pyrenees climbs in sheer gradient, but it’s long at 14 kilometers, and the descent toward the finish in Pra-Loup may be the most dangerous of this year’s Tour. That’s saying something, considering what happened on the backside of the Col de Manse on Monday.

The end of the Tour de France is near, with the procession around the Champs-Élysées set for Sunday. Between now and then, the question will be whether anyone can cut into Chris Froome’s 3:10 lead, and just maybe take him out of the Maillot Jaune. His incredible ride up La Pierre-St. Martin suggests that he may be unstoppable, but if there’s a silver lining it’s that his two closest competitors — Nairo Quintana and Tejay Van Garderen — both seem to thrive on the longer, gentler slopes of the Alps.

In fact, Van Garderen beat Froome on this exact stage just last month. Stage 17 is an exact replica of Stage 5 of the Critérium du Dauphiné, which Romain Bardet won and Van Garderen took second ahead of Froome, who finished third at 40 second behind Bardet. Froome went on to win the Alps-cenric Dauphiné, but Van Garderen was close behind, taking second place at 10 seconds back.

Bardet may be a favorite to win the stage again. Other fast descenders will be in the running, too. Vincenzo Nibali is now finding the form to go with his aggressive mindset. Joaquim Rodriguez, currently wearing the polka-dot jersey while Froome wears yellow, may try to take the King of the Mountains mantle outright with 29 points available on the stage. Froome, of course, is still an extent threat to win, but the nasty descent and seemingly little chance to open a big time gap could lead to a conservative ride.

Racing will begin at roughly 6:45 a.m. ET, with NBCSN picking up coverage at 8 a.m. The NBC Sports Live Extra app will host live streaming for mobile users. Those with subscriptions to NBC’s Tour de France web package can watch online using any device.