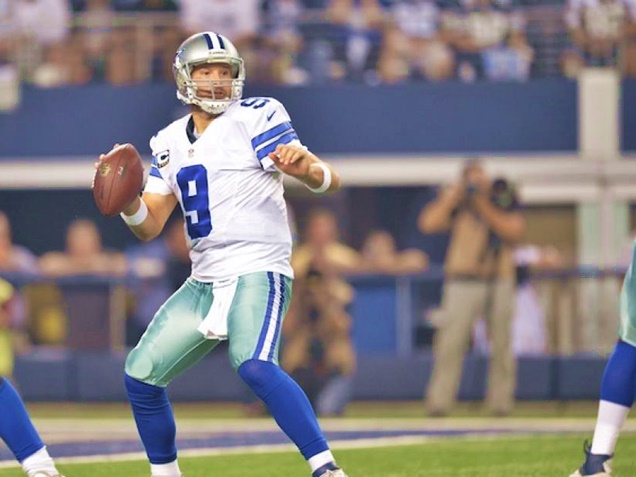 It’s official, Tony Romo decided to retire after the Dallas Cowboys put him up for grabs. We previously told you that Romo had a broadcasting gig on the table, and it appears he is taking the offer.

LatinoAthlete.com has just received word that Tony Romo will be heading to the broadcast booth with CBS, according to reports Tuesday.

Its the end of the Tony Romo era with the Cowboys!

Romo spent his 14 season NFL career on the field playing for the Cowboys, but yesterday was a pivotal moment for the 37-year-old quarterback. Dallas Cowboys owner Jerry Jones gave permission to other teams to contact Romo. That was the same moment Tony weighed his options and decided the best move for he and his family was to pursue broadcasting while relinquishing his future rights.

Romo reached a verbal agreement with CBS to join the network as an in-game analyst, according to The Sports Business Journal. Tony will be replacing former NFL quarterback, Phil Simms, as Jim Nantz’s broadcast partner. Romo had also received an offer from FOX Sports, which we said he needed to pump his brakes and weigh out his options first. He was said to be John Lynch’s replacement, but CBS was the better option. Lynch left the spot open to any of the newly retired NFLers since he left to become the San Francisco 49ers’ general manager in January.

Despite having three more seasons as a Cowboys QB, Tony Romo had been supersede by Dak Prescott as the starter. It had to do with the back injury Romo sustained. He suffered a fractured vertebra in the preseason last august, and was unable to start a game for the Cowboys. That opened the door for Dak Prescott’s career to go into overdrive. It appears that Romo has made the right decision for himself.

Romo, who has made more than $127 million in his career, was slated to count more than $24 million against the Cowboys’ cap number in 2017.

Sloane Stephens bashed a racquet clean in half