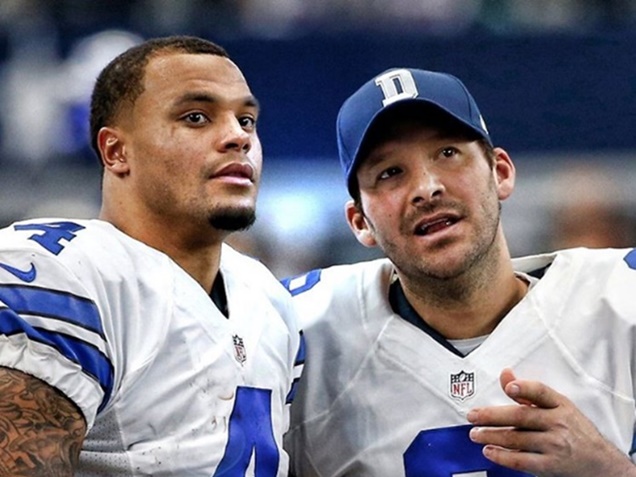 Since the NFL season wrapped for the 2016 season, rumors have been swirling on the fate of Dallas Cowboys veteran Tony Romo. Now he is opening up on his replacement Dak Prescott.

Tony Romo had been dealing with a back injury all season and was unable to play. That was the open door that Prescott needed to prove himself, and he did. Read on…

Now, LatinoAthlete.com has learned via Tony Romo, himself that there is no ill will. He has decided to retire and take on a gig as a sports analyst for CBS Sports.

Meanwhile Dak Prescott will be the main QB on the Dallas Cowboys field. Romo played with the Cowboys for 14 seasons and now he is turning the page on his career, instead of taking an offers from the Texans, or Broncos.

He’s a “good kid.  It probably wouldn’t have went the same way if Dak wasn’t, you know, a good kid.  He’s very respectful. He’s someone that wants to learn.”

Believe it or not, Romo stood by Dak Prescott and anointed him as the team’s starting quarterback in a heartfelt message to the media.

Here is how Tony Romo put it, while handing over the reigns to Prescott:

“If you really just care about football. At the core, if you just love the game, I’m going to like you as a teammate. I’m going to root for you, I’m going to want to see you succeed and I’m gonna want to go out of my way to help you. He has the appetite to want to be great and he’s got a skill set that’s good. I think he’s just going to continue to develop it.”

Romo appears to be happier that he is leaving the field and will instead be reporting on Dak and his teammates from the analyst chair.  Meanwhile, Dak thanked Romo for everything, since he admits he was once a fan turned teammate:

“From a Fan Of Yours to Being Your Teammate: THANK YOU for The Advice On & Off the Field to Making Plays that I’ll Never Forget!”

LatinoAthlete Staff - August 12, 2015
0
Jonathan Toews will now appear on the cover of the video game all by himself. Chicago Blackhawks star Patrick Kane was set to appear...