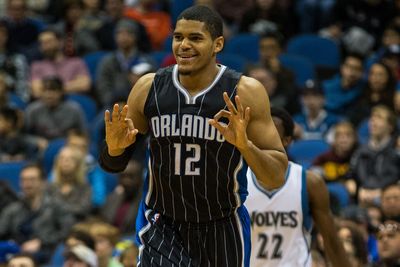 Harris will get a big raise this offseason but it’s unclear if anyone is willing to offer the max.

Orlando Magic forward Tobias Harris will seek out a maximum contract in free agency, reports Real GM’s Shams Charania. The Detroit Pistons and Boston Celtics are the front runners to land his services at this point. According to Sports Illustrated’s Chris Mannix, though, his value might be a bit lower than the maximum.

Harris will be a restricted free agent but the Magic are not expected to match a max contract or one close to it. They recently drafted Aaron Gordon, who projects as an NBA power forward, and Mario Hezonja to be their small forward for the future. Overpaying to keep Harris when they are not close to contending makes little sense for them. For teams like the Pistons and Celtics, who need to add talent, Harris is not a bad consolation prize if they can’t attract top-tier free agents.

Harris should have no problem getting a contract with an eight-figure annual salary and will have plenty of destinations to choose from. Securing a max deal, which would start around $15 million per year, might prove to be harder but not impossible.

His fit in Detroit is unclear, as the Pistons recently traded for Ersan Ilyasova and drafted Stanley Johnson, the two likely starters at the forward spots. As a super sub, Harris should be able to give them minutes at both slots. The Celtics make more sense as a destination, with coach Brad Stevens saying the roster was lacking versatile frontcourt players.

“Right now when you look at our roster, I think we’ve got the three of the four categories with a lot of depth. That swing area where you can go three, four and play that way, that’s the area we’re going to have to address as we move into the next few weeks.”

The 23-year-old combo forward averaged 17 points and six rebounds last season while shooting 36 percent from beyond the arc.

Contributor - July 10, 2017
0
Former IBF middleweight champion David Lemieux may have admitted to passing on Saunders, but that is because he wants to fight Miguel Cotto! Apparently, David Lemieux has...