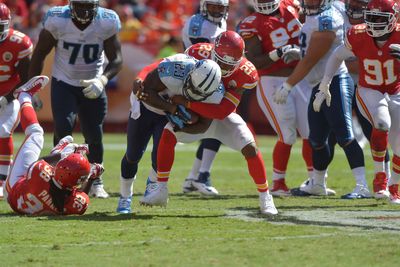 Marcus Mariota should get an extended look when the Titans and Chiefs meet Friday night in Week 3 of the preseason.

The big storyline for the Tennessee Titans when they visit the Kansas City Chiefs Friday night will once again revolve around rookie quarterback Marcus Mariota. The No. 2 overall pick has played well at times this preseason, but the Titans will want to get an extended look at Mariota and his command of the offense in Week 3.

The Chiefs will be using the third preseason game to try to piece together an offensive line that has seen better days. With starters Eric Fisher and Jeff Allen injured, other linemen need to play at a higher level than anyone managed in a 14-13 win over Seattle. Paul Fanaika struggled badly at right tackle and Laurent Duvernay-Tardif looked overmatched at right guard.

The Chiefs run an offense predicated on not turning the football over, but that’s going to be difficult if quarterback Alex Smith never has a clean pocket and running back Jamaal Charles doesn’t have enough holes.

On the bright side, Eric Berry’s return from cancer took another step forward against the Seahawks. The third preseason game is typically when starters play more than usual, but the Chiefs are being careful with Berry. Everything to this point has been encouraging, however.

Meanwhile, Tennessee will be trying to figure out the running back position. Bishop Sankey and Dexter McCluster might work as third-down scatbacks, but rookie David Cobb has shown signs of being the grinder that the Titans didn’t have a year ago. He’ll likely get his longest look yet Friday night.

Defensively, the Titans struggled in the opener against the Falcons, with Julio Jones finding huge gaps in the zone defense. With starters expected to get extended playing time, Friday will be key for newcomers Brian Orakpo and Da’Norris Searcy to build chemistry with the rest of the defense.

West critical of job Jackson has done with Knicks