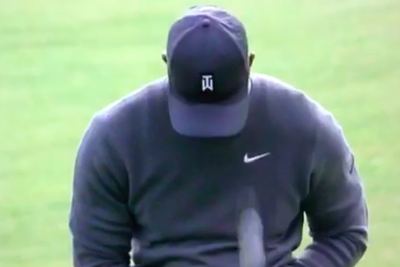 It was really, really hard to make a bogey on the first hole at St. Andrews Thursday morning, but Tiger still found a way.

While Jordan Spieth was up ahead making birdies on his first two holes of the British Open, Tiger Woods was right behind him making an inexcusable mistake to start his championship at St. Andrews.

Woods has bogeyed the first hole of the five of his last seven majors. It’s become such a renowned problem that there are now odds on Tiger opening with a bogey. It usually starts with a missed fairway left, but that is next-to-impossible at St. Andrews, where the first hole is basically an open field with no rough. It may be the widest first “fairway” in the world.

Tiger hit the fairway, but it wasn’t the prettiest swing and his ball settled well back of where most players had positioned themselves off the first tee. He was still in fine shape and a bogey was unlikely. Tiger, however, still found a way and hit a poor wedge short of the green, his ball rattling off the stone wall and landing in the burn.

He would chip on and clean up his putt for bogey, but it was a startling and outrageous mistake to make at the easy first hole. He gave 1.5 shots back to the field by making a bogey there.

UPDATE: After another awful approach shot, Tiger made bogey at the 2nd hole as well. He was the ONLY player in the field at the time to bogey the first two holes.

Matt Barnes is straight up lying about dating Rihanna and he...

LatinoAthlete Staff - August 16, 2015
0
Matt Barnes is living a very curious fantasy -- one in which he's dating Rihanna, or about to date Rihanna or something....