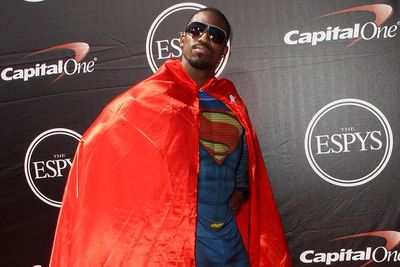 ESPN is hosting the ESPY Awards in Los Angeles on Wednesday night, which means a number of athletes and celebrities are in attendance. Most are decked out in expensive designer suits and dresses. Then there is Raiders punter Marquette King.

You might think King lost a bet and had to wear the costume, but nope, he is Superman.

I am superman I just don’t have the powers to fly, but everyone has a flaw…

And here he is as Superman riding a Phunkee Duck and punting.