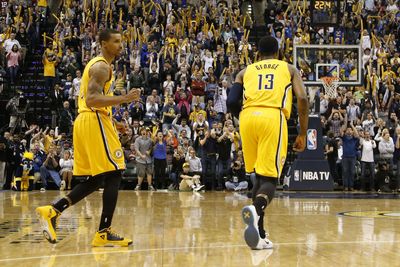 It might be a transition year, but the Pacers have the talent to do damage in the Eastern Conference.

The Indiana Pacers aren’t what they used to be. Gone is the team that once put fear into the heart of LeBron James, Dwyane Wade and the Miami Heat. David West and Roy Hibbert have found new homes this summer, and Lance Stephenson is all but a distance memory at this point.

The new-look Pacers aren’t going to be the same defensive-minded squad that played in the 2013 and 2014 Eastern Conference Finals. Instead, with Paul George coming back from injury and Monta Ellis signing on in the offseason, the Pacers are young, athletic and dangerous in the Eastern Conference.

Team president Larry Bird is embracing small ball with this new iteration of the Pacers. “I felt we had to get up and down the court a little faster and make it more exciting for our fans,” Bird told media at the team’s introduction of Monta Ellis, Jordan Hill, and Chase Budinger. “It’s going to be fun.”

Expect the 2015-16 season to be a transition year for the Pacers because of all the roster changes, but that doesn’t mean they’re going to flop — especially in the Eastern Conference. Indiana may have lost a few key roster pieces, but the fast, athletic roster has the tools to make the playoffs.

The offseason losses will hurt

Both West and Hibbert left Indiana this summer. The biggest blow for the Pacers was the loss of West, who turned down a $12.6 million player option to jump ship to play with the San Antonio Spurs for the veteran’s minimum.

Bird admitted being surprised by West’s departure. “Everything we did this summer was because of (West’s) decision,” he told the media.

West not only averaged 11.7 points and 6.8 rebounds per game for the Pacers in 2014-15, but he was also a leader in the locker room. George Hill and Paul George will to need to step up their leadership roles without West.

Hill — who was arrested for reckless driving on July 31 — and Ian Mahinmi are the early replacements for West and Hibbert. Hill averaged 12 points and 7.9 rebounds for the Lakers last season and is a versatile big man who should fill some of the void left by West. The Pacers are also high on first-round draft pick Myles Turner out of Texas, who Bird noted would likely be a big part of the rotation immediately.

The Pacers are countering the changes in the frontcourt by going small and playing positionless basketball. Bird even said George will be getting some minutes at power forward.

Offensive-minded guards to the rescue — but who’s going to shoot from deep?

George Hill is the only one point guard on the Pacers’ roster, and he’s surrounded by score-first shooting guards. Hill’s best backcourt mate is going to be Ellis, who the Pacers signed to a four-year, $44 million deal. Ellis, who will turn 30 this October, averaged 18.9 points and 4.1 assists per game for Dallas last season.

Plain and simple: Ellis is a scorer. He’s the perfect fit for the Pacers’ new identity of a fast-moving, positionless squad. Behind him on the depth chart are C.J. Miles and Rodney Stuckey, who, like Ellis, can score in bunches. Indiana is going to be able to cycle in players with similar talents, and it’s likely that some combination of Hill and two of the shooting guards will be on the floor at the same time.

There is one problem, though. The shooting guards can score, but none of them can shoot lights out. The Pacers finished in the top half of the league in three-point shooting last season, making 35.2 percent, but they took only 21 per game, which was 18th most in the league. This set of guards isn’t going to help unless there is improvement. Ellis is only a 31.4 percent three-point shooter for his career and hit only 28 percent from deep last season. C.J. Miles hit 34.5 percent of his threes and Stuckey is just a 30.5 percent career shooter from behind the arc (although he did make 39 percent from deep last year). To his credit, Hill makes 37 percent of his threes for his career.

For the fast-paced offense to take off for the Pacers, they’re going to need to improve their three-point shooting, not that it won’t happen. By playing small, it’s likely that the Pacers are going to get better looks from deep.

Wings George and Budinger are solid shooters, too, hitting 36.1 and 35.8 percent from deep, respectively. George is especially going to be counted on if the Pacers are going to challenge for a playoff spot.

Can Paul George be the guy?

Paul George was on the precipice of NBA stardom before a gruesome injury in a Team USA exhibition game during the summer of 2014 kept him out of nearly the entire 2014-15 season. But he did return for six games, and he showed flashes of brilliance.

The big news for the Pacers this offseason was the departure of West and the signing of Ellis, but George’s return to the court is the biggest key for the Pacers’ success.

If George is going to make the jump to superstar, now is the time to do so. At 25, he is entering his prime and has only before he plateaus. He had the unfortunate luck of missing a year, but his return to the court comes in a season when he will have the opportunity to assert himself as a go-to guy for the Pacers.

As mentioned above, with the loss of West comes an uptick in responsibility and leadership for George. He is going to have to fill West’s shoes.

Bird even wants him to fill in for West’s old position. He thinks putting George on the block will help him offensively because he won’t have to spend a ton of time chasing around wings.

“I always liked to get down there and bang with the guys instead of chasing everybody all the time,” Bird told the media. “Coming off his injury (a broken leg suffered last Aug. 1), I think it will be a good year to try it. He can guard some threes but won’t have to do it every time. I think it will be a big plus for him and our team.”

The Pacers lost out on the eighth playoff spot in 2015 because of a tiebreaker, and they’re going to be in the hunt for a playoff spot again in 2016. The Cavaliers are going to be the class of the conference while the Hawks, Bulls, Wizards, Raptors and Bucks are likely to return to the playoffs, but those seventh and eighth spots are there for the taking.

The Pacers made changes to become a less rigid team. If they adapt to a new, high-powered offense, the Pacers are going to be capable of beating anyone.

SB Nation presents: Why go small? The evolution of the three-pointer is one reason

LatinoAthlete Staff - September 3, 2015
0
The past few weeks can't have been all that easy for Anthony Johnson. The feared UFC light heavyweight, who faces Jimi Manuwa on Saturday night...