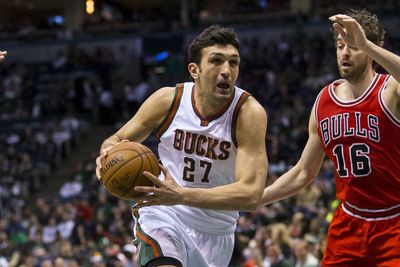 Pachulia isn’t the center the Mavericks wanted, but he should be a suitable replacement.

On Tuesday, the Dallas Mavericks had a starting center and his name was DeAndre Jordan. On Wednesday, they didn’t. On Thursday, Zaza Pachulia took his place.

It was a wild week in Dallas — a emoji-filled soap opera that turned the team into the biggest story in sports by no request of its own. While Jordan breaking his verbal agreement with Mark Cuban won’t be forgotten in Dallas for years to come, the Mavericks had no choice but to move on — and quickly.

Thursday evening’s trade for Pachulia is just that, with Dallas trying to make the best out of a bad scenario. With multiple big men going off the board after Jordan’s original commitment, Pachulia was a creative way to grab a center who’s better than you might think.

Pachulia has played nearly two thirds of his career off the bench but will likely be asked to start for the Mavericks, pending some more unforeseen moves. He ranked second among centers last season in real plus/minus, an ESPN stat that measures how well a team plays with a player on the floor irrespective of his teammates, and was ahead of Tyson Chandler and Jordan. He’s clearly not better than those two, but it goes to show what sort of impact Pachulia had every time he was on the floor.

This opportunity in Dallas will likely be his biggest since he was a 21-year-old averaging 31 minutes a game for the Atlanta Hawks. The Mavericks are still filling out their roster, but if their failed pursuit of Joel Freeland is any indication, they’re looking for a backup center, not someone to start or split time with him.

Now 31, Pachulia will fit resourcefully with the Mavericks. Dallas loves its big men in the high post running HORNS action and Pachulia can do that well, with savvy passing (2.4 assists last season) and enough of a jumper to hit from that distance if left open.

It wasn’t always HORNS. Sometimes, Chandler alone would receive the ball in the high post. Chandler was an average passer for his position and Monta Ellis‘ quickness opened up a variety of easy pitches and handoffs, like the one you can see developing here.

Deron Williams — who will sign in Dallas after clearing waivers — doesn’t have the same quickness, but that’s okay. Put Pachulia in those situations, and he can also face up and deliver a wider variety of passes in Rick Carlisle’s motion offense. Chandler wasn’t comfortable enough with his jumper to do this, but Pachulia shot 49 percent on jumpers from 10-16 feet.

But adding Pachulia’s dimensionality comes at the cost of losing an elite skill. Chandler’s strength wasn’t his occasional jump shot or decent passing, but his undisputed ability to roll down the lane and finish through traffic. The Mavericks ran the most pick-and-rolls (3,568 total) in the NBA last season, but with Pachulia likely playing 30 minutes a night, they will have to adapt. Pachulia is smart enough to slip picks at the right time and he has a knack for finding empty spaces in the lane to receive a pass, but nothing he does can replace Chandler’s athletic rim running and alley-oop opportunities.

Defensively, Pachulia is stout. He allowed the fourth-lowest points per possession (.708) while defending the pick-and-roll and even forced turnovers more than a quarter of the time (28.5 percent), per Mavs.com’s Bobby Karalla. Most of his metrics are comparable to Chandler, who was a strong force but quite visibly the same dynamic player who won Defensive Player of the Year in 2012.

It’s the rebounding that’s most worrisome. Dirk Nowitzki worked hard to become a good rebounder early in his career, but as his athleticism has faded, so has his ability to keep his defender off the glass. Pachulia’s a great offensive rebounder (averaged 2.5 or more per game the last four seasons) but posted the exact same defensive rebounding rate (19.9 percent) as Nowitzki last season.

As the Mavericks continue to hunt for a backup center, someone with chops on the defensive glass seems wise.

Dallas did well to nab Pachulia, but there’s a reason the Milwaukee Bucks gave him away for nothing put a future second-round pick. He’s a great backup for a good team and may end up being out of depth trying to start in Dallas. Efficiency numbers typically decline as usage rises and a similar scenario could play out here.

Pachulia isn’t the center Dallas planned to start the season with, but he’s the best alternative it had. All the Mavs can do is make the most of it.