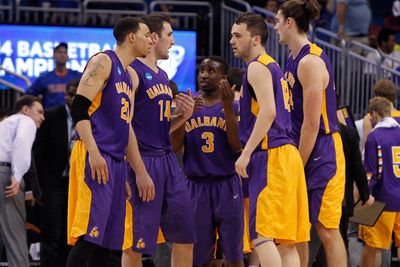 The Hawks will have the option to wear shorts a different color from their uniform. They shouldn’t!

The Atlanta Hawks unveiled their new uniforms! They look kinda cool! Just one problem, though: They apparently intend to interchange the shorts and jerseys, so they’re wearing red jerseys with black shorts or black jerseys with red shorts.

#ATLHawks plan to do mix and match uniforms between jerseys and shorts (see pic in background)… not good pic.twitter.com/zMCokgomu4

In January, 2012, the Grizzlies wore Memphis Tams throwbacks. The Memphis Tams wore gold and green, two colors which are extremely pretty together on sports uniforms. However, when you wear gold jerseys at the same time you wear green shorts, you look like a huge doofus:

For a few years, the Wizards had an alternate jersey with gold tops and black bottoms. It was a cool color scheme, looking back on it. But the shorts made them look like doofuses. Some NCAA teams wear mismatched shorts, like Seattle. As you can see, they look like enormous doofuses. In 2013-14, the Albany Great Danes wore two-toned shorts that were gold in the back, contrasting poorly with their purple tops. The colors clashed super badly. They looked like the biggest doofuses in the world.

I like the Hawks jerseys. I think they’re slick and bold. But basketball jerseys look best when they are the same color as the accompanying shorts. Most football uniforms feature pants with a contrasting color from the uniform. But in basketball, mismatched shorts look like the team brought the wrong shorts to the arena and didn’t have time to run to the store to pick up new ones. There’s simply no way to pull it off. The sudden break in colors halfway down the body is alarming. Even stylish, sharp colors that work together can’t save the look.

The Hawks will have the option to either wear matched uniforms or go for the mismatched shorts look. Let’s hope they opt to go monotone as often as possible.

Contributor - July 17, 2017
0
At the top of July Barcelona forward Neymar signed a new contract which will keep him with the Primera Division champions until 2021. Read on...