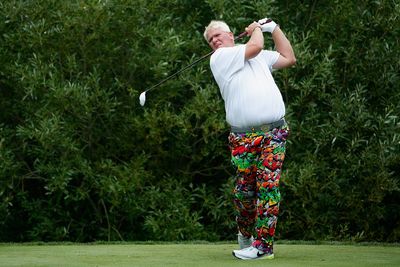 John Daly is simply the best. One of the most entertaining and unique golfers ever, inhibition has never been part of his personality. He’s just true to himself and puts it all out there.

In the world of professional golf, Daly stuck out like a sore thumb. A glorious sore thumb, but it was never hard to spot him on the course. That remains the case even today and we were nearly treated to PEAK JOHN DALY on Thursday at the Barracuda Championship.

There is a whole lot going on here, even for Daly. Let’s break it down.

The John Daly Cocktail Facebook page isn’t saying Daly was enjoying an adult beverage during the round, but they aren’t saying he isn’t, either. For the sake of reaching PEAK JOHN DALY let’s just pretend he was. It’s more fun that way.

Wearing colorful pants while smoking and (possibly) drinking a John Daly Cocktail during a golf round is damn near as John Daly as it gets. The only thing that is missing is Daly being shirtless, while using a beer can as a tee with Lynyrd Skynyrd playing in the background. Nothing we can do about the first two things, but we made this to move one step closer to PEAK JOHN DALY.

Soccer player dribbles past a billion defenders, scores with ease