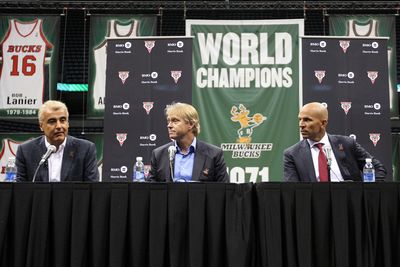 The Bucks must get a new arena built to ensure they stay in Milwaukee. We explain how much progress has been made and whether there’s really a possibility they relocate if plans fail.

The Milwaukee Bucks have slowly built a young talent base that helped secure a surprise playoff berth last year after finishing with the worst record in the league the year before. They followed that up by outbidding the Knicks and Lakers for free-agent center Greg Monroe. The future on the court is bright.

But as the Bucks move forward with their rebuild on the court, they face potentially major obstacles off the court. They must build and fund a new arena very soon to go along with their young talent and shiny new rebranding.

The Bucks have been working toward getting a new arena for years, but the clock really began ticking in 2013 when soon-to-be NBA commissioner Adam Silver insisted that they needed the new facility to replace the outdated BMO Harris Bradley Center.

The Bucks have been pushing hard ever since then to get the ball rolling on construction, but have run into obstacles securing the necessary funding through the city and state legislatures.

Arena renderings and financing proposals have been drawn up, and now the team is trying to pass legislation to secure public funding for the stadium. However, the city is lukewarm on approving those expenses.

If the Bucks cannot get funding for a new arena, there’s a lingering worry that the team will move, perhaps to Seattle or Las Vegas. We’re not that far down the road yet, but that’s the fear that is spurring this effort.

To try to make sense of everything that’s going on, here are a few basic questions and answers about the Bucks’ efforts to build a new arena in downtown Milwaukee.

Why do the Bucks need a new arena?

The Bradley Center opened its doors 27 years ago, and while renovations have been made in recent years to make the arena more viable for the short term, the plan for years has been to get a newer building constructed. The Bucks agreed to a six-year lease in 2012 that runs through 2017, which replaced a less-than-favorable year-to-year lease. This gave the franchise some time to get a new arena built.

The Bucks unveiled preliminary renderings of their new arena and surrounding development projects in April, and now the focus is on securing the necessary financing for the arena.

Wisconsin Gov. Scott Walker unveiled an initial plan in January that would raise $220 million by using the growth of NBA player tax revenues, but a new plan calls for $250 million in public funding through state and local tax dollars over the next 20 years.

These funds come in addition to $150 million pledged by the team’s current owners and an $100 million promise from former owner Herb Kohl. The Bucks would be on the hook over any cost overruns beyond $500 million.

With interest, the public cost could be around $377 million, and the Bucks would enter into a 30-year lease at the new arena and agree not to relocate during that time.

How do the taxpayers feel about these plans?

Naturally, there’s been some backlash to using public money to build the new arena. Americans for Prosperity State Director David Fladeboe called this new proposal a “bad deal for Wisconsin taxpayers” based on “fuzzy math,” while the community organization Common Ground has lobbied against the use of public funding for a new arena.

Several polls taken before this latest deal proposal showed very different results, with one showing overwhelming support against public financing for a new stadium and another showing the opposite.

Bucks president Peter Feigin, general manager John Hammond and head coach Jason Kidd were in Madison on Monday, appearing in front of the Joint Finance Committee. Feigin pushed lawmakers to pass the arena-funding legislation, and a vote could be held as early as Wednesday. The Bucks are hoping to begin construction before the end of the year.

Why is there such a hurry to begin construction?

As part of the new ownership deal with Wesley Edens and Marc Lasry, the NBA included a provision stating that it could buy back the team if a new arena deal wasn’t in place by November 2017. However, Feigin said Monday that the deal calls for construction of a new arena to begin by the end of 2015. That’s very soon!

Feigin warned the public that there’s a possibility of the team moving to Las Vegas or Seattle if they cannot get started by then.

How worried should Bucks fans be worried about a move?

There’s pressure to get things moving on the arena front because of the relocation threats, but there’s still time to get a deal done. Keeping the Bucks in Milwaukee was a condition of the sale to Edens and Lasry, and there will be a strong push to pass the public funding legislation.

If for whatever reason the public funding plans fall through, perhaps the new owners would be willing to pony up more cash themselves. Feigin said recently that won’t happen, but if the alternative is losing the team, maybe the owners pay up.

Matt Kenseth spins out to trigger another ‘big one’ at Daytona