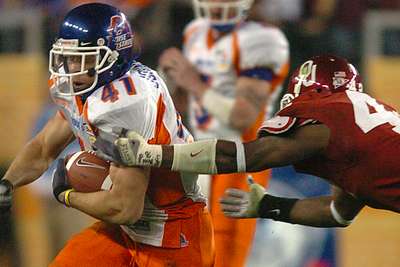 Nice work, Boise State, Missouri and TCU! Notre Dame is nowhere near as overrated as you think! And, wow, look at the Red River rivals!

Preseason polls are frequent targets for complaining. They give too much weight to bowl performances and spring practices, they favor name brand teams, and so on.

But misguided as it might be to have a ranking before actual games, the polls still have meaning. I decided to find out which teams the polls have been most frequently surprised by over the last decade, for better and worse.

Let’s start by looking at the number of teams each conference claims, on average, in the preseason and final AP Top 25 polls since 2005.

The Pac-12 and ACC mostly deliver on expectations, with the same number of teams in the final polls as in the preseason ones. The other power conferences, wellllllll, yeah.

But that graph has limitations. Take the ACC in 2008. In the preseason poll, the conference had three teams, the same as it had in the final ranking. The preseason teams were ranked Nos. 9, 17, and 23. The final poll had ACC teams were down at 15, 21, and 22.

So let’s look at the conferences through a different measure: how many teams have finished 10 or more spots outside their preseason ranking?

Does this mean the SEC benefits from its own hype? If one SEC team loses, the SEC team that beats it just takes its place? Why does the ACC have so few teams that make big leaps or big tumbles? Will we ever give appropriate preseason love to teams outside of power conferences?

All good questions. But we both know why you’re here. You want to know if your team is one of the regular overachievers or chronic face-planters.

That is not a great look, Oklahoma. (Read the whole chart before you start talking trash, Texas.) You’ll notice Missouri’s the only major from the last 10 years with more 10-plus-spot jumps than falls, while Georgia, Iowa, LSU, Michigan and USC are the exact same team. And Wisconsin? Wisconsin’s just all OVER the dang road.

If these results trouble you, just argue that polls are subjective, biased and inaccurate no matter when they come out!

SB Nation presents: Jim Harbaugh has brought optimism to Michigan with his antics

Contributor - June 19, 2017
0
Los Angeles Dodgers Yasiel Puig made an impressive home run against the Indians in Cleveland this past week. Unfortunately, the homer didn't come without...