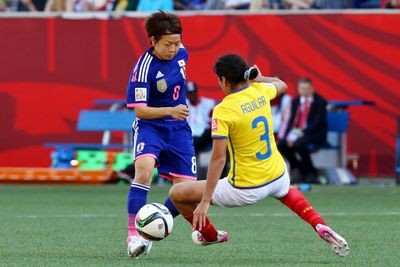 The world is changing, and the era of the dominant center forward has passed.

Center forwards get the most plaudits at every level of the game, in men’s and women’s football, even though they are rarely the most important players. The run and finish on a goal are extremely important, but a variety of things have to go the striker’s way before they get the chance to do those things. In this tournament, that hasn’t happened.

Celia Šašić — the top scorer in the UEFA Champions League — will win the Golden Boot with six goals, but she had none from open play against Norway, the United States or France. Lotta Schelin, the top scorer in France’s Division 1 Feminine, did not score. Vivianne Miedema, a popular pick to win best young player at this tournament, did not score. The USWNT does not have a striker with more than one goal. Neither does Japan. The only top striker to score from open play in multiple games against decent opponents is Canada’s Christine Sinclair.

What happened? Did these players just collectively have bad tournaments?

1. Center back play at this tournament has been phenomenal

The biggest difference between the last Women’s World Cup and this one has been the utter dominance of the top central defenders. Every team that made a decent run in this tournament had good center backs, and in both semifinals, the team with better central defenders won.

As usual, they’re not being recognized for individual awards. Julie Johnston of the United States got a nomination, but her partner Becky Sauerbrunn — who has made fewer individual errors than Johnston, if fewer spectacular plays as well — is not on the shortlist. Neither is Japan’s Saki Kumagai, arguably her team’s best player at this tournament. She’s been a brick wall.

The United States have not conceded a goal since the first half of their first game, despite playing Sweden, a Nigeria side that scored three goals on them, a Colombia team that beat France and world No. 1 side Germany. Japan’s two conceded goals in the knockout stage were on an all-time awful goalkeeping howler and an erroneous penalty call. In the tournament’s 15 knockout stage game, there have been nine clean sheets.

Canada’s Kadeisha Buchanan, 19, and Australia’s Alanna Kennedy, 20, have been two of the best young players at this tournament. Johnston is only 23, while Kumagai and France’s Wendie Renard are only 24.

Through some combination of coaches no longer automatically playing all fast, tall players at striker and the overall improvement of tactics in women’s soccer, central defenders are getting a lot better. This trend is going to continue, and top strikers can’t just bulldoze their way through defenses anymore. That’s not to say players like Šašić, Schelin and Alex Morgan are outdated — they’re just going to have a harder time dominating at the highest level going forward. Teams are going to have to find better ways to get them the ball in dangerous areas.

2. Wide playmakers have emerged as a partial response

Some withdrawn central players have had a big impact at this tournament. Dzenifer Marozsán has been brilliant when healthy, Eugenie Le Sommer has been great as a second striker and Carli Lloyd has had a big impact in her last two games as a central midfielder with lots of freedom to get forward. But advanced central playmakers, for the most part, have struggled to make an impact or been dropped by managers altogether.

Wide playmakers, however, have been some of the top players at the World Cup. Megan Rapinoe of the United States and Aya Miyama of Japan are both left wingers who are not traditional wide players, but technical playmakers who are very good out wide. They’re both nominated for the Golden Ball, and rightfully so. France’s Louisa Necib and Germany’s Simeone Laudehr were excellent, too, and Brazil got the most out of Marta when she played on the left.

In the final, don’t be surprised if superstar forwards Yūki Ōgimi and Alex Morgan continue to be prevented from playing the way they want to by their opposing center backs, while Rapinoe and Miyama make plays for teammates that you don’t usually think of as their team’s top scoring threats. Central midfielders and the right wingers on the opposite side of them are just as likely to score goals as center forwards, due to the spaces Rapinoe and Miyama exploit and where their passes end up.

LatinoAthlete Staff - August 8, 2015
0
The penultimate day of The International was one of national pride. Five teams remained: Three from China, one from Europe and one...