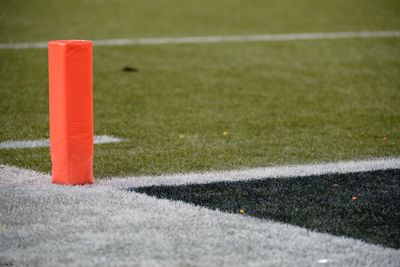 Video shows a pair of players from San Antonio John Jay High School attacking an official at the end of a game against Marble Falls High School.

An ugly incident at the end of a Texas high school football game is being investigated after a pair of players from San Antonio John Jay High School appear to intentionally target and hit an official in the final seconds of a game against Marble Falls High School.

According to Ben Baby of the San Antonio Express-News, the Northside Independent School District and the University Interscholastic League are investigating the incident, which was caught on video from multiple angles.

Spectators at the game told SB Nation that the incident in question came after multiple unsportsmanlike penalties earlier in the game, including the ejection of a John Jay player who threw a punch. The attack on the official came with about a minute left on the clock, while Marble Falls was attempting to run out the clock on a 15-9 victory.

The players involved in the targeting of the official have not been identified, but the events leading up to the attack are also currently under investigation. Via the San Antonio Express-News:

Both players were ejected. Northside ISD athletic director Stan Laing said the video was “very disturbing.” Laing said the district is investigating the sequence of events leading up to the play, and the University Interscholastic League is aware of what happened.

“The question of what instigated that is what we’re trying to figure out,” Laing said.

Laing said the officiating chapter that oversees the Austin-based crew that worked the game is in the process of getting statements regarding the incident.

Players and students from John Jay have tweeted that the hit came after racial slurs were used by the targeted official. John Jay starting quarterback Moses Reynolds is not among those who made allegations of racist comments, but did seem to come to the defense of his team’s actions:

This is for all the jay players and fans foreal…

A father of one of the John Jay players believed to have been involved in the incident told SB Nation that the viral video is being “misconceived,” but chose to withhold a statement:

I have advised my son to let the school put out the response to that misconceived video. Once that happens I will be more than happy to share with you and to share my feelings about an unfortunate incident.

A reporter from KENS 5 in San Antonio confirmed the two players involved have been suspended from the team.

NISD athletic dept confirms the 2 John Jay HS football players who violently collided with a referee are suspended from the team. #kens5news

My San Antonio reported that the officiating chapter is still working on getting statements from people in the hopes of figuring out what instigated the attack.