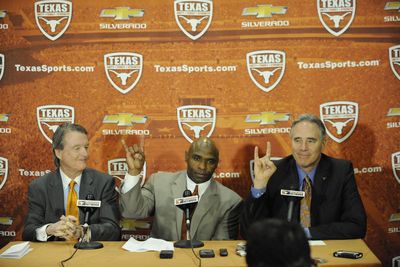 And it added a bunch of very specific rules about it, too!

Last month, Chip Brown of HornsDigest.com published a long investigation indicating that many people were growing frustrated with Texas Athletic Director Steve Patterson. Brown’s report said that Patterson’s relentless focus on revenue was alienating some season ticket holders, and even coaches, from refusing to increase salaries of football assistants to Kansas levels, to raising ticket prices. One of the more hilarious sounding details was a source saying that the Texas athletic department was now charging coaches to eat in the Texas dining halls when they check up on their players.

Thanks to an Open Records request, we can confirm this is true. The Texas athletic department really did issue a new policy limiting the number of times a coach can eat in a dining hall for free, and did so with an usually long and elaborate new policy, which you can read below. Here are some of the highlights:

Brown also reported that this new policy had already had a negative impact on Texas athletics, as it was a reason that its women’s tennis coach stepped down earlier this year. Again, from Brown’s report:

Sources said this new policy had a negative impact on Danielle Lund McNamara, who stepped down as Texas’ women’s tennis coach last month out of frustration. UT didn’t have a tennis facility this season, and won’t next year, because the previous facility was demolished to make room for a new medical school.

“There was no place for Coach McNamara to meet with her team,” one source close to the situation said. “Was she going to use her own money each time she wanted to go into the athletic dining hall just to meet with her players? She’d be taking a pay cut. Come on. It’s ridiculous.

It would be understandable for a much smaller college athletics program having to pinch pennies like this, but for an athletic department with as many resources as the University of Texas, it seems excessive on face value.

If Texas coaches want to meet with their student athletes and have already used up their dining hall allotment, maybe they should just look into going to someplace like Whataburger instead.

Miguel Cotto “Excited to Return to The Ring” for Kirkland Fight

Kevyn De La Cruz - January 25, 2017
0
Puerto Rican Catch weight boxer Miguel Cotto is excited to get back in the ring against James Kirkland. But is his hall of fame...