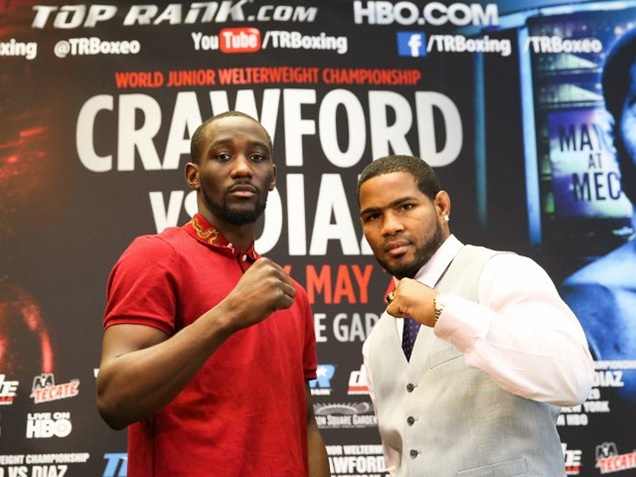 Terence Crawford (30-0, 21 KOs) is amused that fans alleged that he’s afraid to move up to 147 to fight guys his own size. In fact, some fans believe that he is one of the top welterweights in the division after he rehydrates. But if he can make 140, why won’t he just move up in weight instead, but there is no reason for him to move up now.

Next month Crawford is set to fight Felix Diaz (19-1, 9 KOs) and some think he is afraid to fight. The Terence Crawford vs Felix Diaz is already set for a battle in the ring on May 20 at Madison Square Garden in New York. It will air on HBO Championship Boxing next month, so why all the speculation on Terence Crawford?

Word is, Crawford can’t wait to show off his talent to the fans. So why the ducking accusations?

It’s being rumored that Crawford’s promoter Bob Arum looking around for an opponent for his May 20th fight. The fighters in mind are Adrian Granados, Amir Imam and Felix Diaz. Crawford choose Diaz and for the record he isn’t afraid to fight the Dominican Republic and 2008 Olympic Gold winner fighter. That is Terrence’s job to fight whoever Arum finds.

“It’s going to be a fun night. I’m really excited for this fight. I’ve been reading all the blogs people have been sending me for the last couple of days, telling me that this guy said I’m scared of him and I’m ducking him. And everybody knows Terence Crawford doesn’t duck anybody. I’m not running boy, I’m not running! So, we’re here now and that’s everything I must say. May 20th, let the better man win!”

Crawford makes one thing clear on his career:

“Success is not ever owned, it’s rented. And the rent is due everyday!”

It doesn’t sound like he is afraid of anything. Sorry speculators but you have him all wrong.

The Rock has a ‘SPORTSCENTER’ BASEMENT

LatinoAthlete Staff - June 26, 2015
0
The Rock was all over Twitter this morning to share a promo clip for his snazzy new show, Ballers. In the clip, we're reminded...