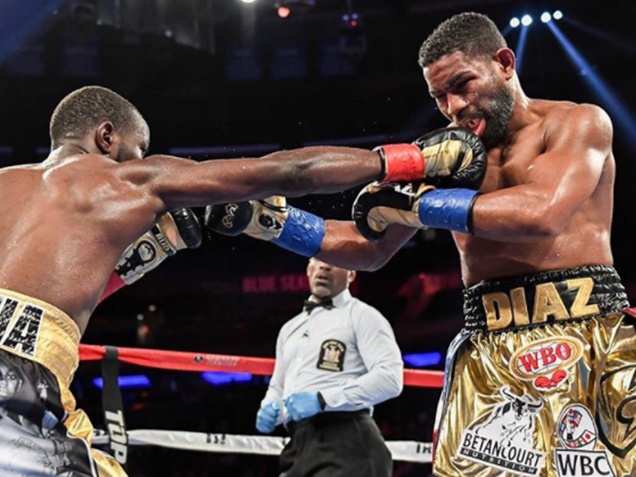 We were really hoping that Feliz Diaz would come through and beat Terence Crawford, but that didn’t happen. Diaz may have been on of his tougher opponents but Crawfor was unfazed, He did what he said he’d do and that was make a statement out of Diaz.

LatinoAthlete.com has the results from the Saturday night fight between Terence Crawford vs Felix Diaz that ended at the 10th round with a KO.

Undefeated WBA/WBO light welterweight champion Terence Crawford (31-0, 22 KOs) continued to prove why he’s one of the truly great fighters in boxing after he took out Felix Diaz. Many of us thought that Diaz was going to give Bud a hard time defending his title, but that wasn’t the case. Crawford dominated Olympic gold medalist Felix Diaz (19-2, 9 KOs) to defend his junior welterweight titles by 10th-round TKO at New York’s Madison Square Garden.

Crawford’s execution in the ring against the Dominican southpaw was brilliant, he controlled the fight, domination with jab after jab at Diaz. This fight was far from boring like his previous ones.

Basically, Terence sadly over-matched opponent Felix Diaz in beating him by a 10th round stoppage on Saturday night in their fight on HBO Championship Boxing from Madison Square Garden in New York. It ended when Diaz’s corner stopped the fight after round 10 for the good of their fighter. Felix was suffering from vision problems after Crawford continually attacked Diaz’ right eye. It was almost closed and his left eye was swollen as well.

Round 9 and 10 had Diaz at a disadvantage against the ropes. He could barely fight since his vision minimal. It got so bad for Diaz that Crawford often stood and waited for Diaz to attack him. Before the fight ended Bud stepped forward and began to pepper Diaz with jabs, smiling and sticking his tongue out at him.

Watch: Felix Diaz’s corner ends the fight in Round 11 of #CrawfordDiaz. pic.twitter.com/eihofLbHhS

Here is what Terence Crawford had to say:

“I cam out southpaw because I do what I want in there. It’s my ring.”

Take a look at some of the highlights from the fight:

LatinoAthlete Staff - June 10, 2015
0
Iman Shumpert exited for the Cleveland Cavaliers in the first quarter of Game 3 against the Golden State Warriors with an injured...