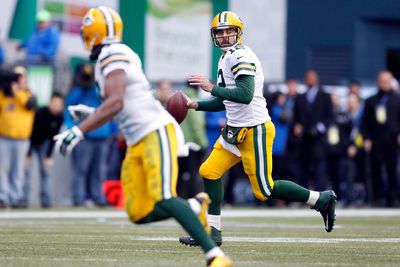 The Green Bay Packers have moved ahead of the Seattle Seahawks as the preseason favorite in the odds to win Super Bowl 50.

The Green Bay Packers went 12-3 SU and 10-5 ATS over their last 15 games last season. With the 2015 NFL season just a couple of months away, the Packers are currently the betting favorite on the odds to win Super Bowl 50.

Green Bay is going off at 6/1 to win the Super Bowl this year according to sportsbooks monitored by OddsShark.com. The Packers have been bet down to 6/1 after opening at 8/1 after New England won Super Bowl XLIX. Green Bay appeared to be on its way to the Super Bowl up 19-7 in the closing moments of last year’s NFC Championship Game, but an improbable comeback by Seattle brought Green Bay’s season to an end. The Packers will have a chip on their shoulder this season.

The Packers won’t be the only team with a chip on their shoulder this year. After falling one yard short of winning back-to-back Super Bowls, the Seattle Seahawks should be plenty motivated to get back to the top and are just under the Packers on the betting board at 13/2 to win the Super Bowl. Seattle finished last season on an 8-1 SU and 6-2-1 ATS run per the OddsShark NFL Database.

After losing to the eventual Super Bowl champion Patriots 45-7 in the playoffs, the Indianapolis Colts had a busy offseason adding plenty of free agents including Frank Gore and Andre Johnson on offense. The Colts went 13-4 SU and 11-5-1 ATS over their last 17 games last year, and are hoping that an influx of hungry veterans will help put them over the top. Indianapolis is going off at 8/1 odds to win the Super Bowl at the sportsbooks.

Other top contenders expected to compete for the Super Bowl this season include the Patriots (9/1), Dallas Cowboys (10/1) and Denver Broncos (12/1). As it currently stands, Tom Brady is set to miss the first four games of the regular season as a result of his suspension for his involvement in New England’s deflated balls scandal. If Brady’s appeal leads to a reduced suspension, the line will likely move down on the Patriots.

LatinoAthlete Staff - July 6, 2015
0
Stage 3 will feature the first climbs of the Tour de France, and a good opportunity for struggling general classification contenders to...