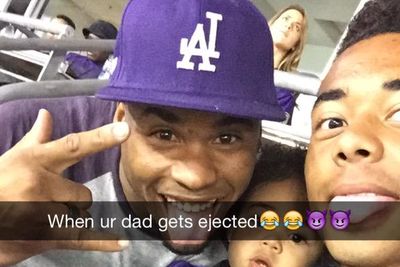 1st time I’ve ever gotten to watch a game with my dad. Thanks @NFL pic.twitter.com/8qyhHaKZJY

Baltimore Ravens receiver Steve Smith was ejected in Saturday’s game against Washington after a multiple-player skirmish. Most people would be livid to see their favorite player ejected from a game they attended. Surprisingly, Steve Smith’s son, Peyton Smith, took the ejection lightly.

The ejection meant that Steve and Peyton got to watch a football game together for the first time! Based on his tweets, the young Smith is aware of his father’s tough reputation in the league.

That’s what I’m talkin about pops! Not bad for a 36 year old

Actually got ejected for ballin too hard https://t.co/Q8g8B9IW9c

SB Nation presents: How to determine fantasy sleepers and busts

Conspiracy Hanging over Bellator: Was Kimbo vs. Shamrock Fake?

LatinoAthlete Staff - June 22, 2015
0
Last Friday’s inevitable showdown between Kimbo Slice and Ken Shamrock was like watching an episode of Jersey Shore. We all knew it would be...