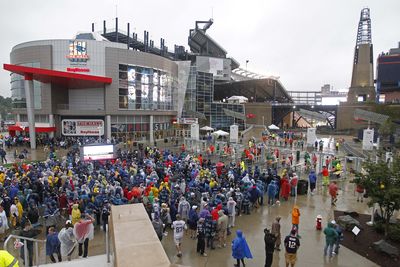 The 2015 NFL season is finally upon us, beginning with the defending Super Bowl champion New England Patriots and Tom Brady hosting Ben Roethlisberger and the Pittsburgh Steelers on Thursday night at Gillette Stadium.

The 2015 NFL season kicks off in style with a must-see primetime matchup on Thursday night between the New England Patriots and the Pittsburgh Steelers. After an offseason dominated by endless DeflateGate headlines and courtroom drama, the Patriots are ready to get back to the version of football played on the gridiron, where they’ll attempt to be the first team to repeat as Super Bowl champs in more than a decade.

Winning back-to-back titles is tough, though. It’s only been done eight times since the first Super Bowl in 1967. But the last team to do it is a familiar one — the Patriots following the 2003 and 2004 seasons.

After unveiling their Super Bowl banner to the partisan Gillette Stadium crowd, the Patriots will have to put last year behind them and focus on their next test. The Steelers have high expectations coming into the season, but the Patriots have dominated this series recently, winning eight of the past 11 matchups, including victories in the 2001 and 2004 AFC Championship games en route to their first two Super Bowl titles. The last time these two rivals met in a Week 1 matchup was Sept. 9, 2002, when the Patriots christened Gillette Stadium with a 30-14 win on Monday Night Football.

The Steelers won the AFC North title last season but were upset in the Wild Card round of the playoffs by the Ravens. They are still looking for their first playoff win since 2010, a drought that would be an afterthought for most teams but is nearing panic mode for such a successful franchise like the Steelers. It’s the first time they’ve gone four seasons without a playoff win since 1990-1993; Pittsburgh has never had gone five straight seasons without winning at least one playoff game since the AFL-NFL merger in 1970. Safe to say there’s pressure on the Steelers this year to make some noise in the postseason.

The league began its Thursday Night Kickoff showcase in 2002 and the defending Super Bowl winner has hosted every year since 2004 (except for 2013 due to a scheduling conflict in Baltimore). The champs are 9-2 in those previous 11 season-opening games, with the only losses by the New York Giants in 2012 and the Baltimore Ravens in 2013.

Thanks to the monumental decision by Judge Richard Berman to nullify Roger Goodell’s four-game suspension of Tom Brady, the Patriots signal caller has been cleared to play in 2015 and the fans have been rewarded with a truly historic quarterback matchup in Week 1.

This is the first season-opening game in NFL history in which both starting QBs have previously won multiple Super Bowls — Roethlisberger has two rings (Super Bowls 40 and 43) while Brady has four rings (Super Bowls 36, 38, 39 and 49). Brady will also be making his 14th consecutive opening-game start, the fourth-longest streak all-time by a quarterback. According to the Elias Sports Bureau, only Brett Favre (15), John Elway (16) and Dan Marino (16) have longer streaks.

Although the Patriots have their franchise quarterback back under center, this is not the same New England team that celebrated a Super Bowl title last February. The Pats’ secondary has been decimated by the losses of three cornerbacks (Darrelle Revis, Brandon Browner, Kyle Arrington). It will be nearly impossible to replace Revis, who graded out as a top-5 corner in each of the last two seasons, per Pro Football Focus.

They also are really thin in the backfield with LeGarrette Blount (team-best 4.7 yards per carry in 2014) suspended for the opener and the offseason departure of Shane Vereen (team-best 148 touches in 2014). Complicating things even further, the Patriots will be without one of their top wideouts, Brandon LaFell (74 catches, 953 receiving yards), who was placed on the PUP list.

The Steelers might face the toughest road of the 2014 division winners in trying to defend their title. Pittsburgh has the most difficult schedule in the league, based on their opponents’ win percentage from last season (.579), and play 11 games against teams that finished with a winning record last year. They’ll also be missing a trio of key players for this game: Pro Bowl center Maurkice Pouncey is out with a leg injury, while both running back Le’Veon Bell and wide receiver Martavis Bryant are serving suspensions.

Bell ranked second in the league with 2,215 yards from scrimmage, nearly one-third of the team’s total in 2014. Bryant led the NFL with 21.1 yards per reception (min. 25 catches) last year. The Steelers’ offense should be one of the most explosive units in the NFL, but without those three critical pieces, they’ll be challenged to keep up with the Patriots on Thursday night.

Aaron Dobson – With LaFell sidelined for the first part of the season and Julian Edelman’s injury status unclear, this is Dobson’s time to shine. Although he barely played in 2014 (three catches for 38 yards in four games), the third-year wide receiver has been tagged as a “breakout star” for this season and should definitely be on your radar. He’s likely to see single coverage on the outside with the Steelers committed to jamming Rob Gronkowski, and he’s a legitimate vertical threat at 6’3 with 4.4 40-yard dash speed.

Antonio Brown – The NFL’s leading receiver from last season is going to have to shoulder even more of the load in this game with Bell and Bryant on the sideline. Brown is one of the most consistent wideouts in the league — he’s riding an NFL-record streak of 33 games with at least five catches and 50 receiving yards — and probably needs to have a big game on Thursday night if the Steelers are going to upset the Patriots.

Most of the experts are siding with the Patriots to start their season with a win. Seven of the eight guys at CBS Sports are taking New England, with only Pete Prisco as lone Steelers champion. All seven experts at SB Nation plus the OddsShark computer think the Patriots are set to roll in Week 1.

The Patriots are 7-point favorites with an over/under of 52, according to OddsShark.com.

For more on the Patriots, head on over to Pats Pulpit. For everything Steelers, check out Behind the Steel Curtain.

Warriors Get Their Asses Kicked Once Again As Steph Curry’s Three-Pointer...

LatinoAthlete Staff - November 5, 2016
0
For their first week of the season, the Golden State Warriors largely looked like another data point to support the theory that new superteams...