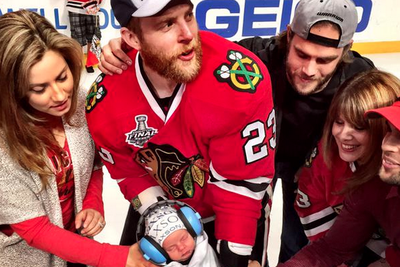 This is probably the quickest a baby has been put in the Cup after the final game.

Kris Versteeg is a proud new dad, having welcomed a baby boy just two weeks ago. His impossibly tiny baby is the proud new owner of a Stanley Cup.

Congrats to Kris and Brittany Versteeg on the birth of their baby boy Jaxson James! #BlackhawksBabies pic.twitter.com/2iqyG00pAl

And from Monday night:

So pleased that the Versteeg family is practicing ear safety. It was LOUD in that building for Game 6.

Other players tried to get in on the baby action, like Andrew Desjardins.

But let’s face it, the tiniest baby clearly won here.

LatinoAthlete Staff - July 31, 2015
0
Driving to the 6 with some woes. After being traded to the Toronto Blue Jays, David Price was making his way to Toronto...